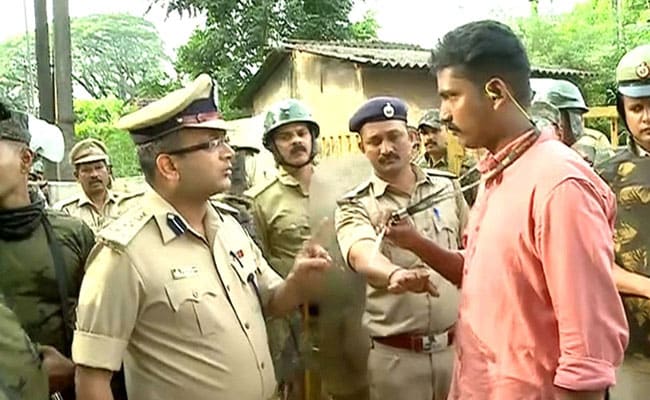 Two people died in police firing in Mangaluru on Thursday

Journalists and crew from at least three Kerala-based news channels - News 24, Media One and Asianet - have been stopped from reporting in Mangaluru in Karnataka, where two people died yesterday in police firing amid protests against the new citizenship law. In a video of the incident, a senior police officer stops a reporter while he is on-air and demands to see identification. On being shown what appears to be a company-issued ID, the cop can be heard shouting: "No, that is not accreditation... not government-issued... Out!"

The four news channels were reportedly in Mangaluru to interview the relatives of those who were killed during massive nationwide protests against the controversial Citizenship (Amendment) Act, or CAA, on Thursday.

In the video, a senior police officer, accompanied by at least a dozen colleagues - at least two of whom are armed - walks out of a compound guarded by a yellow-coloured gate; the reporter, who appears to be from Media One, was standing with his back to the gate.

"Where is it? No... no. Please switch it off. Show your accreditation card... prove that you are a genuine media person. Switch it off (to the cameraperson)," the senior officer says.

As the camera continues rolling the reporter continues reporting and shows the officer what appears to be an ID card. The police officer says: "No, that is not accreditation...it is not government-issued. You don't have access... only accredited journalists," adding, "Out!"

At this point another police officer places his hand on the microphone and makes a warning noise before the cops herd the reporter and the cameraperson away.

This morning Mangaluru Police Commissioner PS Harsha issued a statement: "Few people not having any accreditation cards issued by any authority, not from any formal media and in possession of many things unconnected to reporting are being questioned". The statement also says "further action" will be initiated once verification is complete.

Karnataka Home Minister Baswaraj Bhomai has blamed the violence in the city on groups from Kerala who have been staying in Mangaluru for over a week.

Kerala Chief Minister Pinarayi Vijyan has strongly condemned the detention and said the onslaught on media freedom was indicative of a "fascist mindset".

"I strongly condemn the attempt to portray journalists as troublemakers and their news-gathering equipment as weapons. Onslaught on media freedom is a fascist mindset. There must be strong public sentiment against this," Mr Vijayan said in a statement.

A Kerala Minister has told news agency ANI that the Chief Secretary has been directed to contact the Karnataka government and conduct an inquiry.

Protests were held in 13 major cities yesterday - the eighth consecutive day of unrest - over the new citizenship law that is emerging as the biggest challenge to Prime Minister Narendra Modi's government since his election in 2014.

In Mangaluru, two persons died in police firing, city police confirmed. Curfew has been declared in the city till Saturday and mobile internet suspended for the next 48 hours. During the day, the police opened fire as the protesters and police clashed.

The law promises citizenship to non-Muslims from Pakistan, Afghanistan and Bangladesh who moved to India by 2014. Critics say it challenges the foundations of India's secular constitution by making religion a criterion for citizenship.