The poor in the Sundarbans keep paying the price of climate change even when they have negligible carbon footprint. The delta is sinking as sea level has been rising year after year, say scientists

Mousuni is one of the many islands in Sundarbans facing existential threat (Photos: Harjeet Singh)

Sundarbans: Sundarbans, a UNESCO World Heritage Site, spread across 20,000 square kilometres in India and Bangladesh, is threatened by rising sea level -- one of the most conspicuous effects of climate change.

"You see, there we had a graveyard, it got washed off by sea waves... Then we made it there, but again it was submerged in water. Our homes were also swallowed by sea water. Where to go now?" 25-years-old Iftikhar says of Mousuni Island in the Sundarbans where he lives with over 2,000 others.

Mousuni is one of the 102 islands on the Indian side of Sundarbans facing existential threat.

With homes swept away time and again by raging water and cyclonic effects and agriculture devastated by saline water, several people have been forced to migrate from here and many permanently.

"Our homes are ruined several times and agriculture isn't possible here. We have bare fields as you can see. There is no crop. It is almost impossible to grow anything here because of very high salinity," says Mehmood Baig, who lives in Mousuni.

The Indian side of Sundarbans is spread across 9,500 square kilometres of land. With almost two-third of this area being forest, this is a biodiversity hotspot known for its diverse and rich mangroves. It is also home to the Royal Bengal Tiger. Today, the delta is sinking as the sea level has been rising year after year. Several people have been forced to migrate from the Sundarbans and many permanently.

"People here have learned to live with tigers. In fact, erstwhile poachers have now become promoters of eco-tourism and villagers inform the forest department about tigers. However, what they fail to understand is how to deal with the effects of climate change," says Anurag Danda, who has been researching on the fragile ecology of Sundarbans for 20 years.

People have built embankments in several islands of Sundarbans to prevent water from entering, but it breaches every time. Ever since cyclone Aila hit the east coast of India in 2009, the situation has worsened in the Sundarbans. In Mousuni, people have built embankments as many as seven times so far. Climate change experts say that given the increasing frequency of cyclones, sea level rise and salinity of water, some people will have to be relocated elsewhere in the next few years.

"We won't be able to keep so many people here. A vulnerability assessment of this region is needed. There is no escape route; people will have to be taken out from vulnerable ares in the Sundarbans. We have to create means of employment for them somewhere else," says Nilanjan Ghosh, who is associated with the World Wildlife Fund. 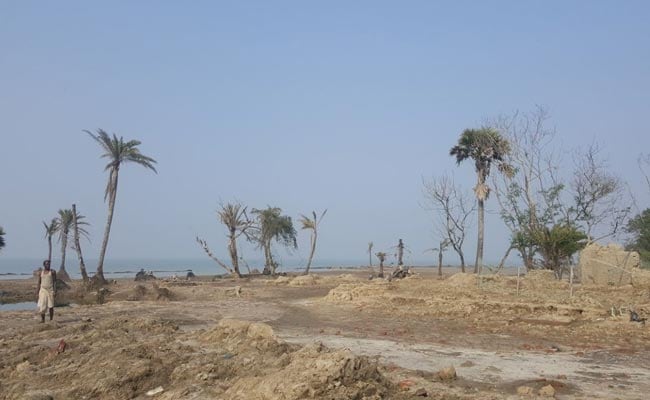 People have built embankments in several islands of Sundarbans to prevent water from entering, but it breaches every time.

Today, the world over the phenomenon of climate change is being realised by people and countries. Although US President Donald Trump has debunked this phenomenon by calling it a hoax created by developing countries like India and China, several island nations have sought strict action to curb the effects of global warming.

Experts call it a case of loss and damage faced by island nations and demand for adequate compensation.

"Mousuni Island is a living testimony of unprecedented climate change impacts being witnessed in India and around the world. Yet, the global community, particularly rich nations who are primarily responsible for the crisis, have failed to provide adequate support to help people overcome climate challenge," says Harjeet Singh, Global Lead on Climate Change at Action Aid International.

Promoted
Listen to the latest songs, only on JioSaavn.com
At a time when developed countries adopt tactics that delay climate action in developing countries, the poor keep paying the price of climate change even when they have negligible carbon footprint. Not only agriculture but fisheries are also affected and the question of sustainability is looming large.

"The central government must highlight climate impacts, such as being faced by Sundarbans and other vulnerable areas of India, at the UN meeting to draw attention of the global community and demand action," Mr Singh said.