The CJI, however, said later at the farewell function, organised by the Supreme Court Bar Association (SCBA), that now he has decided not to speak from the mind and would keep talking from the heart. 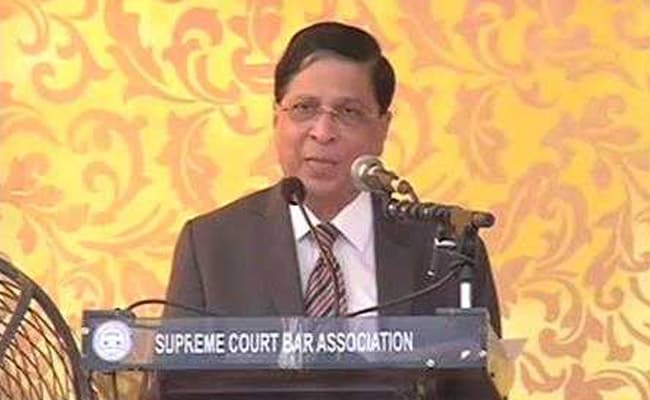 Outgoing Chief Justice of India (CJI) Dipak Misra held court with his successor Ranjan Gogoi for the last time on Monday, and stopped a lawyer who broke into a song to wish him long life, to say that he was "responding from the heart" but will speak from his mind in the evening.

The CJI, however, said later at the farewell function, organised by the Supreme Court Bar Association (SCBA), that now he has decided not to speak from the mind and would keep talking from the heart.

Justice Misra, who presided over benches that delivered a series of key verdicts, including the ones on Aadhaar and homosexuality during the last 10 days, appeared to be emotional during the proceedings which lasted for 25 minutes.

At the CJI-led bench, also comprising Justices Gogoi and A M Khanwilkar, Justice Misra made it clear at the outset that he would not hear matters listed for urgent hearing and they would be dealt by his successor on October 3.

The brief proceedings in CJI's courtroom witnessed an emotional turn and drama when a lawyer crooned, "Tum jiyo hazaron saal...," singing the opening lines of a  Hindi film song from the late 1950s usually played on birthdays.

The Chief Justice in his inimitable style said, "no, no" and stopped the lawyer from singing further.

Then, in a strange turn of events, lawyer R P Luthra mentioned two ostensibly controversial tweets by senior lawyer Indira Jaising and advocate Prashant Bhushan against the outgoing CJI, criticising his recent judgements, including the verdict on the Koregaon-Bhima violence case.

He urged the court to take cognisance of the tweets, but the bench didn't respond after perusing them.

Later in the day, the CJI visited journalists in the top court premises and parried all the questions including those related to his experience as head of the judiciary.

The CJI sopke at length about English literature and famous poet and writers.

"What are your future post retirement plans," a scribe asked.

"Astrology is not a science, yet people believe in it. I am not an astrologer," the CJI responded.

CJI Misra has headed various benches of different combinations, and delivered several verdicts in the recent past.

These include upholding the Centre's flagship scheme Aadhaar with certain riders and decriminalising consensual gay sex and adultery.

The verdicts also include judgements in the Koregaon-Bhima violence case and allowing all women entry into the Sabarimala temple.

Justice Misra was appointed additional judge of the Orissa High Court on January 17, 1996, before his transfer to the Madhya Pradesh High Court. He became a permanent judge on December 19, 1997.