"Will Probe Modi-Made Disaster Notes Ban If We Come To Power": Congress

Congress staged protests near the offices of the Reserve Bank of India in Delhi and the state capitals. 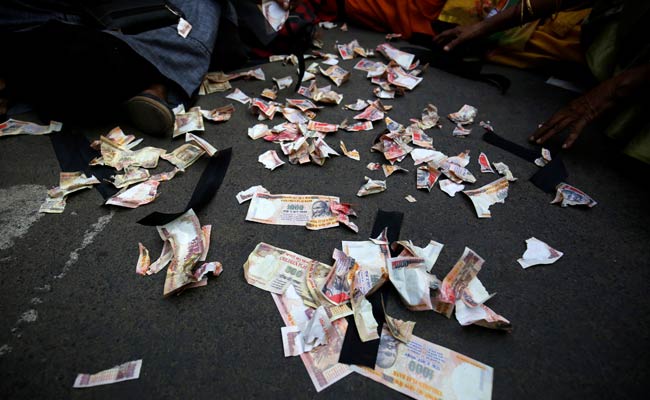 Congress cadres Friday staged protests against demonetisation in several states a day after the second anniversary of the note ban with one senior leader calling it a "Modi-made disaster" that will be probed if the party comes to power at the Centre in 2019.

The protests were staged near the offices of the Reserve Bank of India (RBI) in Delhi and the state capitals.

With no let up in the war of words between the government and the opposition over the ban of high-value notes announced by Prime Minister Narendra Modi on November 8, 2016, the Samajwadi Party (SP) and Bahujan Samaj Party (BSP) also joined the Congress in dubbing the exercise a "failure".

Leaders of the SP and BSP demanded an apology from the Bharatiya Janata Party(BJP) for the hardship caused to the poor. "Demonetisation broke the back of the poor," they said.

Finance Minister Arun Jaitley Thursday staunchly defended the demonetisation drive, saying 'prophets of doom' have been proven wrong as hard data of two years showed an increase in tax base, greater formalisation of the economy and India retaining the fastest growing economy tag for the fifth year in a row.

The BJP also posed 10 questions to the Congress, asking why it finds merit in protesting every "anti-corruption" measure of the Modi government.

Senior Congress leader Randeep Singh Surjewala dubbed demonetisation as the "biggest scam of independent India" and claimed it had pushed the country towards economic disaster.

"Demonetisation is a Modi-made disaster," he said.

Mr Surjewala said demonetisation and all other scams of the present government would be inquired into if the Congress was elected to power.

Mr Surjewala earlier tweeted that demonetisation was a "scam" to convert black money to white and asked the BJP to declare who is responsible for the "economic loss" caused by the move.

Youth Congress members accompanied by senior party leaders were detained by police after they staged a protest against demonetisation outside the RBI office in Delhi.

"Around 70-80 Congress protesters, including Ashok Gehlot, Anand Sharma and Bhupinder Singh Hooda have been detained," police said. The protesters were later released.

They raised slogans against the Centre describing the exercise as an "anti-people" decision.

"People are still awaiting an answer that except ruining business and increasing unemployment, what benefit has it given? If the government considers it a success, it should tell (people) in whose pocket the benefit went," SP chief Akhilesh Yadav said in Lucknow.

BSP supremo Mayawati claimed that none of the objectives of demonetisation have been met.

"The BJP should offer an apology for the move. The BJP government at the Centre will be remembered as a government of failures in which none of the promises made to the people were fulfilled," she said in a statement.

Mayawati said resentment was brewing among the people as the BJP, which promised to bring back black money and ensure "acche din" (good days), stood exposed.

BJP spokesperson Sambit Patra, meanwhile, hit back at Rahul Gandhi over his criticism of demonetisation, saying a war is going on in Indian politics with the Modi-led government working to curb black money while the Congress president was allegedly trying to save it.

Demonetisation destroyed the "ill-gotten wealth of the four generations of the Gandhi family", Mr Patra alleged at a news conference in Delhi, claiming that the move led to many benefits, including increase in tax base, curbing black money and hitting Naxalism.

In his criticism, the Congress chief had said that demonetisation was a planned "brutal conspiracy" and a "shrewd scheme" to convert the black money of PM Modi's "suited-booted friends".

In a fresh tweet, Mr Gandhi took a swipe at the prime minister over demonetisation, accusing him of conning people after promising to generate jobs and bring back black money, but helping his "suited-booted" friends instead.