Protests broke out in both houses of parliament today over electoral bonds and privatisation of public sector units (PSUs), leading to interim Congress President Sonia Gandhi leading a walkout in the Lok Sabha and the Rajya Sabha being adourned till noon. The Congress, which called both issues "big scams", accused the government of "making corruption official". The protests in the Lok Sabha, which included a 15-minute period where MPs stormed the Well while chanting slogans, also featured a sharp exchange of words between Adhir Ranjan Chowdhury, the Congress's leader in the House, and Speaker Om Birla.

The issue began with senior Congress leader Manish Tewari raising the issue of electoral bonds. He said that the government's decision to go ahead with the scheme despite the central bank's reservations "made government corruption official".

However, on making a reference to the Prime Minister's Office, the Speaker cut his microphone and asked another member to raise the issue. At this point Mrs Gandhi left her seat to lead the walkout.

Earlier, as Congress leaders approached the Well chanting slogans the Lok Sabha Speaker appealed for order, reminding protesting MPs that it was their "responsibility to maintain decorum and dignity".

"This is wrong. The House is discussing a very important issue on sports persons. No, no. Don't talk to the chair from the Well. It is the responsibility of every member to maintain decorum and dignity of the House," he said, adding, "I am a new member. You are senior. Don't come to the Well,"

To this Mr Chowdhury shot back, calling the electoral bonds issue and the sale of PSUs a "big scam". 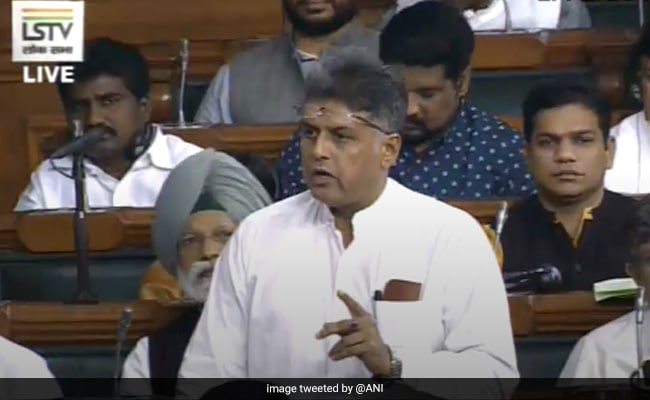 Parliamentary Affairs Minister Pralhad Joshi also got involved, declaring that Prime Minister Narendra Modi was running a clean government with no scope for corruption. He also said the Congress comes "everyday with an adjournment motion bringing some issues".

Meanwhile, in the Rajya Sabha Congress leaders had filed a notice to discuss electoral bonds with reference to the Reserve Bank of India's reservations. Rajya Sabha Chairperson Venkaiah Naidu said the issue did not warrant suspension of scheduled items and, with the opposition refusing to relent, he adjourned the house.

The confrontation erupted soon after ministers laid listed papers on the table. Mr Naidu confirmed he had received notices to suspend scheduled business to discuss the central bank's objections to electoral bonds and disinvestment and privatisation of public sector units (PSUs) such as Bharat Petroleum Corporation Limited (BPCL).

"They (the notices) do not warrant suspension of other business and (notices) taken upon priority," he said, adding that it was the Chair's prerogative to decide on which discussions would be taken up.

The Congress was yesterday equally vociferous in its demand the government disclose all details of electoral bonds before parliament. Describing it as a "political bribery scheme", the party said it was a scam that tarnished the image of the Indian democracy.

Under the electoral bonds scheme, the government has offered complete anonymity to those making donations. A donor can now anonymously buy a bond and deposit it with the party of their choice.

On Monday Huffpost reported the Reserve Bank of India (RBI) had objected to the scheme and the amendment to the RBI Act, contending this could encourage money laundering, undermine the faith in Indian banknotes and erode a core principle of central banking legislation.

But its objections were brushed away by the government. Electoral bonds were announced by then Finance Minister Arun Jaitley two days later and a month later, the Finance Bill 2017 was passed.