Opposition Meets, But No Names Yet For Rajya Sabha No. 2 Job

Rajya Sabha Chairman M Venkaiah Naidu has announced that the election will be held on Thursday at 11 am. 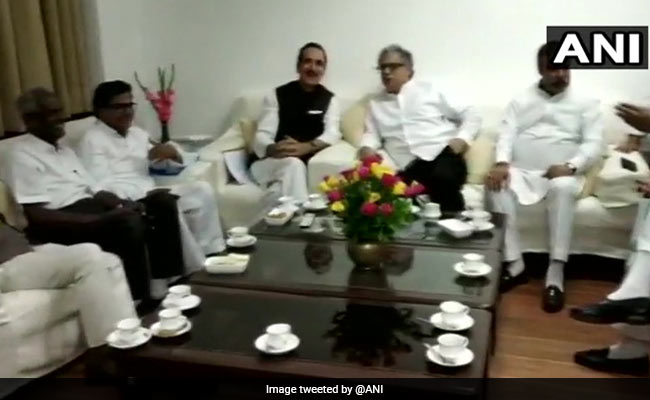 The opposition parties met this evening but no one appeared willing to field a member, sources said.

The opposition meeting to pick a candidate for the post of deputy chairman of parliament's upper house remained inconclusive on Monday. The parties will meet again at 11 am today to finalise a candidate, sources said. The government is likely to field Harivansh Narayan Singh, a member of Bihar Chief Minister Nitish Kumar's Janata Dal United, for the post.

Rajya Sabha Chairman M Venkaiah Naidu has announced that the election will be held on Thursday at 11 am.

The opposition parties met this evening but no one appeared willing to field a member, sources said. In a first, Chandrababu Naidu's Telugu Desam Party, which broke away from the NDA earlier this year after being refused special status -- attended the opposition meeting.

"We have heard that the government is thinking about fielding a candidate from BJP or its allies. We want the opposition to have the deputy chairman's post," senior Congress leader Ghulam Nabi Azad said this morning. The 69-year-old leader, however, said it was "not a prestige issue" for them.

The opposition has been unable to zero in on a candidate since it became clear months ago that an election is on the cards as the government was not ready to allow a candidate of the united opposition. For a time, the name of Trinamool Congress' Sukhendu Shekhar Roy did the rounds, but Mr Roy later said his party was not willing to put up a member and would support any consensus candidate.

To win the post, a candidate needs the support of 123 members in the 245-member house. While the opposition has bigger numbers than the government, the NDA can win if it gets the support of non-aligned parties like Odisha Chief minister Biju Patnaik's Biju Janata Dal and Telangana's ruling Telangana Rashtra Samithi.

The Congress, which has 51 seats in the upper house, would have been a natural claimant for the post. But in view of the urgency to forge a united front ahead of next year's general elections, the party has signaled its willingness to give space to others.