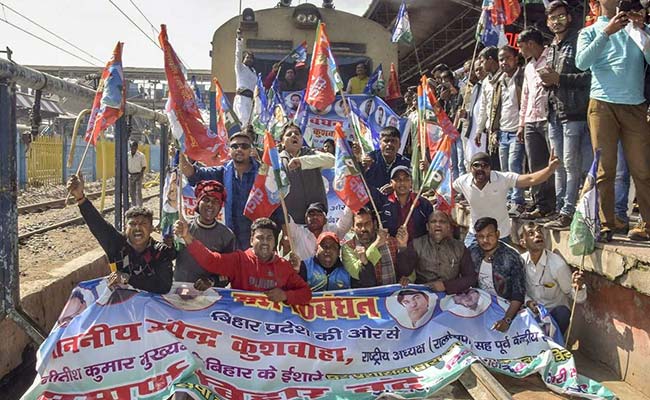 The Bihar bandh called by opposition parties in protest against the lathi charge on Rashtriya Lok Samata Party (RLSP) chief Upendra Kushwaha and his party workers two days ago evoked mixed response on Monday with normal life remaining unaffected by and large notwithstanding stray incidents of road blockade and arson.

In the state capital, the RLSP activists received active support from its partners in mahagathbandhan (Grand Alliance) -- the RJD and the Congress.

The CPI(ML) Liberation and the Aam Aadmi Party had also extended their support to the day-long bandh.

In Ara, the district headquarters of Bhojpur, Superintendent of Police Aditya Kumar said the bandh went off peacefully though 24 activists of the opposition parties courted arrest at the town police station and they were let off after having made to sign bonds.

Road blockades for a couple of hours was reported from East Champaran district but normal traffic resumed after 10 am.

Around 30 bandh supporters, belonging to RLSP, Congress and Samajwadi Party, were taken into custody in Nawada as they tried to enforce the shutdown in Prajatantra Chowk area of the town.

The bandh was more effective in Arwal, a part of which falls under Kushwahas Lok Sabha constituency Karakat.

RLSP and RJD workers took out processions raising slogans against the Nitish Kumar government and blocked traffic on the national highway NH 98 by burning tyres, leading to a traffic snarl.

In Begusarai, the bandh remained peaceful and shopping establishments did normal business though bandh-related incidents led to traffic jams on national highways NH 28 and NH 31.

Local leaders of the RJD and the RLSP were seen staging demonstrations in various parts of the town.

Mr Kushwaha, who resigned as Union minister of state for HRD and quit the NDA in December, was staging a march on Saturday to the Raj Bhavan carrying signatures of one crore people of the state gathered by his party in support of a charter of demands for educational reforms. He is at present recuperating at the PMCH hospital in the state capital.