Lok Sabha Election 2019: Sources in the Election Commission said that the voting machines will not be changed.

Opposition parties want either BJP's name to be removed or that of other parties added.

Opposition parties on Saturday complained to the Election Commission that the BJP's name is appearing under its electoral symbol of a lotus on electronic voting machines, and asked it to take necessary action for correcting the anomaly.

A delegation of leaders from ten opposition parties, including Abhishek Manu Singhvi of the Congress, Dinesh Trivedi and Derek O'Brien of the Trinamool, met Chief Election Commissioner Sunil Arora and demanded that the BJP's name should either be removed from the voting machines or the names of other parties be added.

However, a senior Election Commission official told NDTV that the opposition parties were incorrect in their deduction. "In mid-2013, the BJP approached the commission saying that the outline of their symbol is very light and should be bolder. Based on their request, the outline of lotus was made bolder, and that included the water below the lotus symbol. These water lines look like F and P but not BJP," he said, adding that the symbol has been in use since 2014. 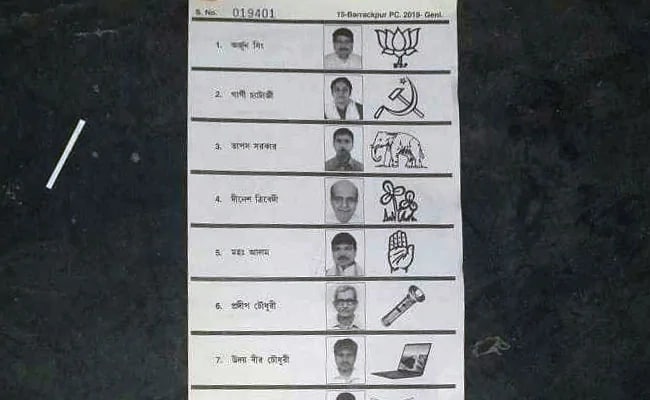 Opposition leaders have alleged that BJP's name is appearing under its electoral symbol on voting machines.

"On EVMs, the letters BJP are visible under the party's symbol. No party can use the party's name and its symbol together," Congress leader Abhishek Manu Singhvi said.

On Friday, Mamata Banerjee's Trinamool had alleged that the symbol of BJP ''lotus'' on the ballot paper has broken lines appearing below its stem, smudged in such a manner that it can be easily read as "BJP".

According to news agency PTI, the Election Commission also stated in a letter to the West Bengal chief electoral officer that there was nothing to suggest that the markings under the symbol reflect the name of any party.

Sources in the agency also said that the voting machines will not be changed.