Opposition Blames BJP Over Rising Crimes Against Women In Tripura 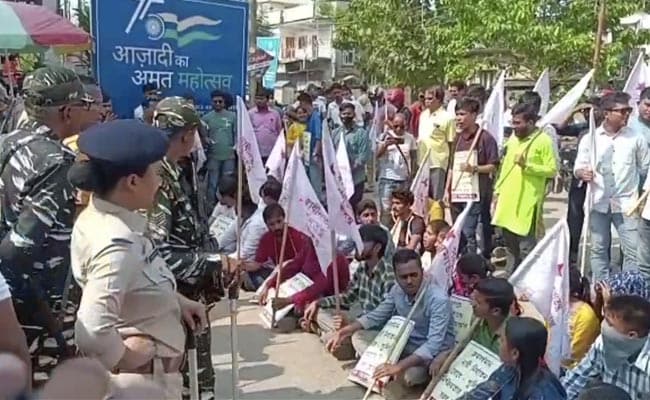 Tripura opposition parties have held rallies, protesting crimes against women in the state

From molestation to gang rapes, in the past fortnight, Tripura witnessed half a dozen cases of heinous crimes against women. While there are allegations that the police delayed registration of complaints in some cases, opposition parties have claimed the involvement of BJP functionaries in some of these crimes. Ruling BJP, though, has refuted these charges as politically motivated.

In Khowai district, a BJP panchayat member was named as a co-accused in the gang rape of a minor tribal girl. "Investigation is on. We have arrested six people," said Jyotisman Das Choudhury, the Public Relations Officer of Tripura Police.

The issue of law and order in general and that of women's security in particular has emerged as a major flashpoint between BJP and the opposition in a state that goes to the polls in four months' time.

According to official reports, 407 incidents of rape, including 26 gang rapes, were recorded in the state since January 2020. Seven women were murdered after rape.

The gang rape of a teenager in Unakoti district on October 19 has become a rallying point with Opposition parties alleging that Labour Minister Bhagaban Das's son was involved in the crime.

"There are allegations of the involvement of BJP men. The name of a minister's son is doing the rounds. This only goes to show the state of affairs in the state and we at TMC will raise this issue," said Sushmita Dev, TMC MP and the party's in-charge in Tripura.

However, the BJP has stood by the minister, insisting that the allegations were politically motivated. BJP's women cadres have taken out rallies to counter the opposition's charges.

The minister in question has released CCTV footage, claiming that his son was not present at the scene of the crime. He also pointed out that his son's name doesn't even figure in the FIR.

"Until now, six people have been arrested, while search is on for three other accused persons. Only these names surfaced in police investigations. Yet, they are trying to link my son. This is a political conspiracy by the opposition," Labour minister Bhagaban Das told NDTV.

While the victims await justice, politics over crimes against women has taken centre stage.

The Left parties, Congress and TMC hit the streets over the last few days with rallies protesting crimes against women in Tripura, though the demonstrations have largely remained out of the glare of mainstream media.

The opposition parties are blaming the BJP-led alliance government for what they claim as a dismal law-and-order situation in the state.

"For how many more days will this government enjoy its slumber, keeping its eyes and ears closed? For how long will the government evade its responsibilities? Women will not spare those who forgive this government," said Manik Sarkar, Tripura's former Chief Minister and CPI(M) politburo member.

The Ruling BJP has retorted to opposition charges, citing the decade when, under the Left rule, Tripura infamously topped the nation in crimes against women.

"What was the condition of the state in the past when they (CPM) were in power? Between 1998 and 2008, Tripura topped the list in crimes against women in the country. As far as the current incidents are concerned, BJP does not interfere with investigations," said Sushanta Chowdhury, Tripura's Minister for Information.