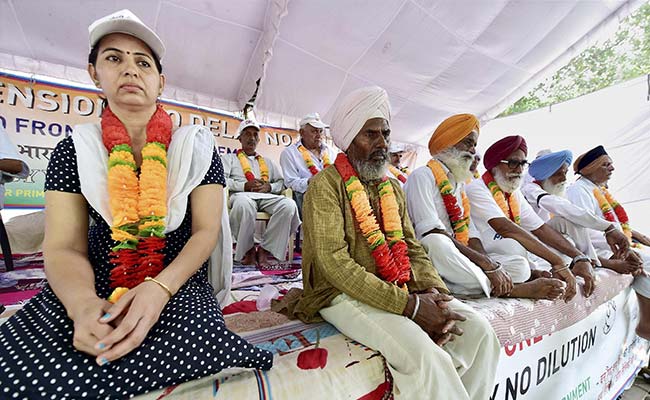 Ex-servicemen during their protest for One Rank One Pension (OROP) scheme, at Jantar Mantar in New Delhi. (Press Trust of India photo)

New Delhi: Ex-servicemen protesting against the government-approved One Rank One Pension (OROP) alleged today that their bank accounts have been blocked, but said the move will not succeed in suppressing their agitation due to resource crunch.

"Bureaucrats had probably assured politicians not to take this agitation seriously as it will wear out like any other agitation in a few days. They even managed to get our bank accounts blocked through their emissary and were confident that the agitation will be forced to be stopped with funds drying up," Group Captain VK Gandhi (retd) said in an open letter to the ex-servicemen.

"How can resource crunch stop this agitation of our status and our rights," he asked, adding that their morale was "high" and "determined" to achieve the OROP.

He said the OROP, as offered by the government, was "not acceptable" as there were "severe shortcomings" in the offer.

The relay hunger strike by the protesters entered the 98th day today.

Group Captain Gandhi also thanked the ex-servicemen for turning up in large numbers for the agitation and contributing funds to run the protest.

He said it was important to plan activities across the "length and breadth" of the country to convey a message to the government that their morale was high and "no pressure can shake" them from achieving the OROP.

While veterans want rationalisation of pensions every year, the government has provided for review every five years. They also want the one-man judicial commission to be replaced with a five-member committee with their representation.

Another issue is fixation of pension as per the highest pension for the rank, against the government's announcement of it being average of highest and lowest pensions, with protection to those with higher pension.