Ex-Servicemen Threaten to Scale Up One Rank One Pension Agitation 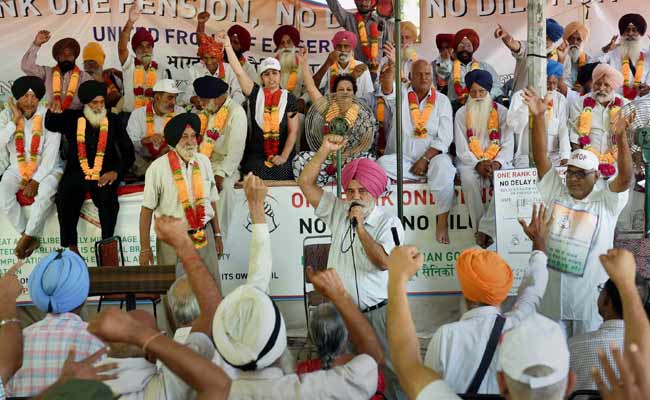 Ex-servicemen during their protest for implementation of One Rank One Pension (OROP) scheme, at Jantar Mantar in New Delhi. (Press Trust of India photo)

New Delhi: The agitation by the ex-servicemen to press for One Rank One Pension completed its 93rd day today, and the protest leaders said a mega rally will be held on December 13 if the issue is not resolved by then.

"We are going to scale up the agitation. There will be a series of rallies in Bihar, Punjab and Haryana, and a major rally in Delhi on December 13 if the issue is not resolved," Major General Satbir Singh (retd.), who has been spearheading the agitation, told IANS.

The veteran said they may book the Ramlila ground for the rally in December.

"To reach out to the youth and people of the nation, we will also hold a series of marches," he said.

The rally in Bihar is expected to be held in October, the veteran told IANS.

"It is the misfortune of the country that the soldiers are not being respected. The soldier takes bullets for the nation, and dies unsung... The widow of a jawan gets Rs 3,500. How can she support her family with that," asked Major General Singh.

"In the Kargil war, 527 soldiers died, and over 1,300 were left disabled, they cry every day. Can't this government pay them the credit for the work they have already done?"

The veteran reiterated that the pension is just a deferred payment of the service already rendered, and added that soldiers retire earlier, and have lower life expectancy than civilians.

"We are asking for what is rightfully ours. We were cheated in 1973, the civil government employees increased their pension from 33 per cent to 50 per cent and reduced ours," he said.

Major General Singh also objected to Prime Minister Narendra Modi's statement in Chandigarh that the poor of the country are to be thanked for OROP as they gave away what was there to provide OROP which will cost more than Rs 10,000 crore.

"We are asking for our dues. If the Prime Minister feels we are taking away the share of poor, we do not want it," he said.

"The Prime Minister owes us an apology," he added.

The veterans want the base year for OROP to be financial year 2013-14, in place of 2013 announced by the government.
They want the date of implementation to be April 2014, instead of July 2014 as announced by Defence Minister Manohar Parrikar.

While veterans want rationalisation of pensions every year, the government has provided for review every five years.

The veterans also want the one man judicial commission to be replaced with a five member committee with their representation.

Another issue is the fixation of pension as per the highest pension for the rank, against government's announcement of it being the average of the highest and the lowest pensions, with protection to those with higher pension.

The ex-servicemen have also objected to the suggestion of handing over the working of modalities of the scheme to 7th pay commission as announced by the government.