One Of The Most "Satisfying Missions": Army Officer on Kerala Trekker's Rescue

Trekker Babu was trapped in a recess on the mountain face, between rocks located about 400 metres below the hill summit, in the scorching heat with no water or food since Monday. 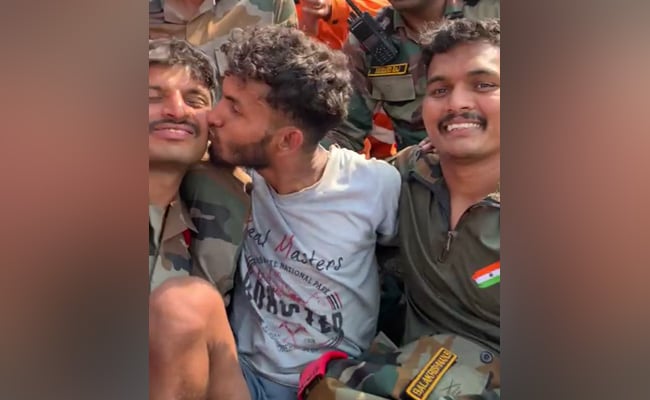 With steep slopes, sharp and solid rocks and stony terrain hiding dangerous clefts within, Kurumbachi Hills in Malampuzha in Kerala's Palakkad used to test the luck and willpower of visitors trucking to its summit.

When Indian Army personnel started climbing the mountain through the wildlife infested deep jungle to rescue stranded trekker Babu at midnight, the challenges they faced were aplenty but they vowed that they would fight it out at any cost, recalled Lieutenant Colonel Hemant Raj.

Lt Col Raj, who led the Madras Regimental Centre (MRC) team that rescued the young trekker from the face of a mountain cleft through a breath-taking operation on Wednesday, said it was one of the most 'satisfying missions' in recent times that they could finally save the precious life of a youngster.

Babu was trapped in a recess on the mountain face, between rocks located about 400 metres below the hill summit, in the scorching heat with no water or food since Monday.

The officer said the MRC team deployed for the mission was a nine-member group of specialist mountaineering experts.

"As we reached the base on Tuesday night, we were informed about the peculiarities of the mountain and its topography by the authorities. Though we were told that it was okay to commence the mission by morning, we decided to start trekking by 12 am," Lt Col Raj told PTI.

Before that, a clear picture of the place was collected using Google Map and a rescue plan was got ready to lift the stranded trekker to safety using ropes after getting down to the place where he was trapped.

Along with the MRC team, personnel from the police and forest departments, NDRF officers and some civilians having experience in climbing the Kurumbachi hills were also among the 30-member group of rescuers.

Heavy ropes and other weighty equipment were carried to the mountain top by the army men themselves.

However, reaching the hilltop was not at all an easy task for the Army personnel as darkness, vegetation, sharp-cutting edge cliffs and constant presence of wildlife posed serious challenges, he said.

My team came across three bears while trekking, he said, adding that it took six hours for them to reach the top.

When they reached around 200 metres away from the cleft where Babu was stranded, they called him by his name and informed them that the rescue team had arrived, to which the youth responded quickly.

The thrilling videos of the army men telling him not to worry went viral on social media platforms later.

"We had already decided that our plan would be to go down near the cleft where he was trapped using rope. But, there were not many trees to tie the anchor rope on that stony terrain. But, finally we have got a huge rock to tie our main rope," Lt Col Raj explained.

After that, another anchor rope was tied to a strong tree, which we came across 20 metres away from there.

"Thus the army man B Balakrishnan, alias Bala, climbed down to Babu with the support of two safety anchors. As there were risk elements to pull two persons together, we used a third safety anchor also through Deepak, another team member, from mid-way while lifting Babu," he said.

Stating that the willower of the young trekker played a key role in the success of the mission, the officer said he showed the world how everyone should tackle such a dangerous situation in life.

"We should look at the practical aspects of life in difficult situations and he showed us how to do that. When he reached the hilltop, he hugged us and kissed Bala and Deepak...the bold man became a bit emotional that time. He even said he wanted to join the Army and wished to be like us," he said with a chuckle.

Lt Col Raj said the cleft, where Babu managed to sit for two nights and a day, was a tiny hole or gap formed in the face of mountains because of the flow of water.

"What Babu told me that he fell down two times but somehow got the grip there and managed to climb into the cleft. He suffered some minor injuries in that fall," the Keralite officer added.

The youth was later airlifted to safety using the Mi-17 Helicopter of the Indian Air Force and rushed to a government district hospital here.

Babu, who is under medical surveillance, on Thursday said he was ok and his health condition was improving.

Though there were reports that the Forest Department was likely to register a case against the trekker for allegedly trespassing into the wildlife area, the government later made it clear that no action would be taken against him.

After being trapped in a cleft on a mountain face in Malampuzha area of Palakkad district in Kerala for nearly two days, rescue teams of the Army were able to reach Babu, provide him food and water and then haul him to safety on Wednesday morning.

According to locals, the youth, along with two others had on Monday decided to climb to the top of Cherad hill there, but the other two abandoned the effort halfway.

However, Babu continued to climb to the top, and after reaching there, slipped and fell and got trapped between rocks on the mountain face.