"A Day Will Come When...": Nitish Kumar Says RSS Out To Rewrite History

Nitish Kumar said: "And be sure to know, a day will come when the Father of the nation, Mahatma Gandhi, Bapu, will also be cast aside... see what they are doing for the killer of Bapu" 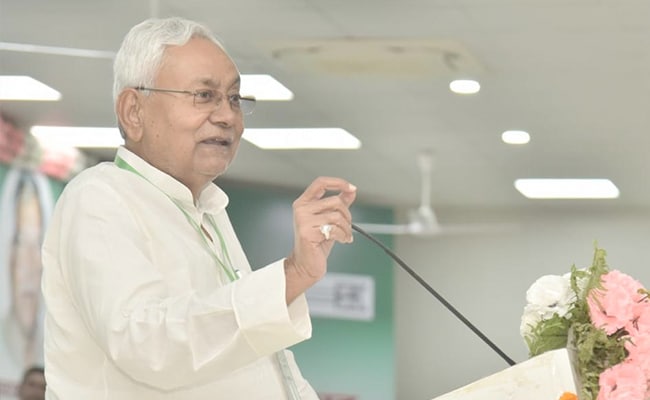 Bihar Chief Minister Nitish Kumar has slammed what he called "the pretense" over the celebrations for 75 years of Independence and alleged that the Rashtriya Swayamsevak Sangh, or the RSS, would write a new version of the freedom movement if they could -- one where Mahatma Gandhi would be "cast aside". The BJP and the RSS, its ideological mentor, had no contribution in the freedom movement, Mr Kumar has said in a scorching speech, scoffing at the 18-month "Azadi ka Amrit Mahotsav celebrations" announced last year by Prime Minister Narendra Modi.

"What is the name they used? Azadi ka Amrit Mahotsav. Amrit. Who was the leader of the Independence Movement? It was Bapu (Mahatma Gandhi). So they could have called it the Bapu Mahotsav," Mr Kumar said at a National Council meeting of Janata Dal United in Patna.

"And be sure to know, a day will come when the Father of the nation, Mahatma Gandhi, Bapu, will also be cast aside... see what they are doing for the killer of Bapu," he added.

Mr Kumar made it clear that though he was an ally of the BJP at the time, he had stayed away. "I was with them. So I did not say a word. But please know this, I never supported all this meaningless nonsense," he said.

When Union Home Minister Amit Shah had called a meeting of all Chief Ministers in June, Nitish Kumar had skipped it, and deputed his then deputy Tarakishore Prasad.

Mr Kumar has been loud in his criticism of the BJP after ending his alliance with the party for a second time last month. He is currently in Delhi, meeting various leaders with an aim to create a strong opposition front against the BJP in the 2024 elections.