A video from West Bengal shows a man inside a polling station during the panchayat polls, stamping a bunch of ballot papers.

Kolkata: Voting on counting day. That, shockingly, is what took place in West Bengal today where votes were counted for panchayat polls that took place on Monday across the state and repolls yesterday.

Video taken through a wire mesh around some counting tables shows a man in a pink shirt and dark trousers furiously stamping blank ballot papers. Someone shouts "Hey Pankaj", the man turns around, sees someone filming him in the act, waves a fist at him threateningly and shouts "gets lost, don't get too smart. He then gets back to stamping the ballot papers as furiously as before.

Around him, people watched quietly. Someone at the end of clip shouts, "Hey Debashish". This man has not been arrested till reports last came in. Nor has he been officially identified, though some rival party candidates claim he is a Trinamool worker named Saheb Ghosh. NDTV could not independently confirm his identity.

The incident took place in Nadia district in the Krishnaganj police station area at a counting centre at the Majdia Sudhir Ranjan Lahiri College. The false voting took places at counting tables for two gram panchayat constituencies at Shibnibas. The miscreants stormed the counting centre after throwing bombs outside so party workers and police fled or were in disarray. As news of the incident spread, BJP workers rushed to the spot and clashed with Trinamool workers. The police had to fire teargas shells to disperse the mob.

The State Election Commissioner was made aware of the incident around noon, he immediately called the District Magistrate and Superintendent of Police and sought a report. Counting was suspended and will be reviewed after the report reaches the SEC. A huge police force was rushed to the area to control the situation. 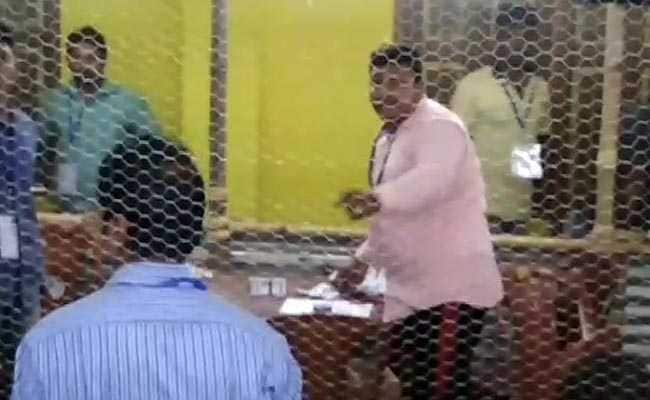 The video of the ballot papers being stamped at random went viral and was reported in several media channels. Senior Trinamool leaders dismissed the video as "contrived". By who and for what is not clear. Some Trinamool leaders claimed similar footage was doing the rounds where the BJP symbol was being stamped. In the video of the man in the pink shirt stamping the ballot papers, it is not clear which symbol he was stamping on. Reports later in the day showed ballot papers on which the vote had been cast for the BJP had been stamped over, made invalid.

This latest and gross violation of poll norms comes on the last day of the panchayat poll process in West Bengal that's been violent -- over 20 people dead since poll day and before that, according to chief minister Mamata Banerjee herself, at least 14 people lost their lives. The poll has also been contentious and bitterly fought over at Calcutta High Court and Supreme Court.

Prime Minister Narendra Modi has said the poll in Bengal was a murder of democracy. Trinamool retorted PM Modi was frustrated with the mess in Karnataka. Mamata Banerjee said, "The PM has said all kinds of things without checking facts. Trinamool people have been killed by the BJP. I will not say anything."

She however complained of repeated home ministry's harassment. "The MHA questions us even if some BJP supporter writes to them with some complaint," she said.

The BJP has been complaining about the panchayat poll process, in court and outside, along with the CPM and the Congress. Their intending candidates could not file nominations in many places in the state because of Trinamool terror, they said. Trinamool denied the charge. But when the matter reached Supreme Court, the judges expressed concern over the fact that Trinamool candidates had won 34 per cent of the panchayat seats unopposed, without any contest, as there were no rival candidates in the race.

"What can we do if these parties don't have any supporters who will stand as their candidates," has been the Trinamool's refrain.

On poll day, at least 11 people were killed and around 50 injured in poll-related violence with crude bombs, guns, knives and sticks. In South 24 Parganas district, a husband and wife -- CPM supporters  -- were found burnt to death. While the CPM blamed Trinamool for the crime, Trinamool denied any links and said they may have been hit by lightning or electrocuted. In Nadia and North 24 Parganas, alleged Trinamool workers trying to capture poll booths, were stopped by locals and thrashed. Two of them were beaten to death. By Wednesday, the toll crossed 20.

Promoted
Listen to the latest songs, only on JioSaavn.com
The Trinamool Congress claimed the violence was sporadic and far less than what took place during 35 years of Left rule.

Senior party leader Derek O'Brien tweeted: "To all 'newborn' experts on Bengal #PanchayatElections in State have a history. 400 killed in poll violence in 1990s in CPIM rule. 2003: 40 dead.Every death is a tragedy. Now closer to normal than earlier times.Yes, few dozen incidents. Say,40 out of 58000 booths. What's %age?"