Heavy rain in several parts of Madhya Pradesh has led to water-logging and hours-long traffic jams in several areas. 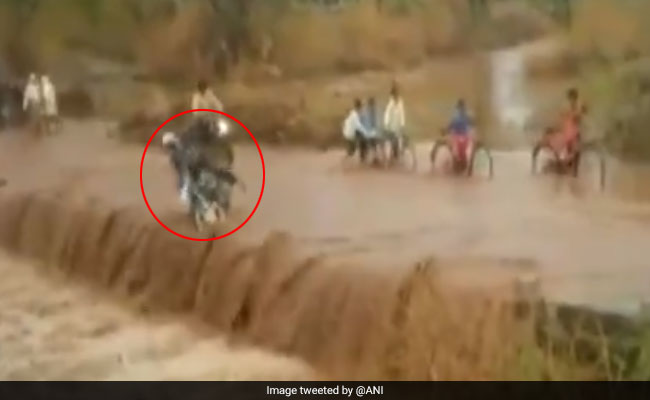 The man was later safely rescued by the people present at the spot.

A man on his bike falls off a flooded road in Madhya Pradesh's Khargone area on Wednesday. Some local people got him out of the drain that flows alongside the road.

The incident, filmed by passersby on mobile phone, shows the biker losing control after being swept off by the fast flowing water. Others are seen cautiously maneuvering through the muddy waters.

Heavy rain in parts of Madhya Pradesh has led to water-logging and hours-long traffic jams in several areas.

#WATCH Madhya Pradesh: A biker was swept away while crossing a flooded road in Khargone. He was later rescued by locals. (02.07.19) pic.twitter.com/uXYK0HlhuL

The Indian Meteorological Department has issued a heavy rainfall warning for Indore, Bhopal and Jabalpur.

"Monsoon is yet to reach Chambal and Gwalior. Rest all other areas of Madhya Pradesh have been hit by the monsoon. A good weather system has arrived this time. Today, Bhopal is expected to receive 1 cm to 2 cm rainfall and tomorrow 3 cm to 4 cm," said Ajay Shukla, scientist at the Met department.