Did Uddhav Thackeray Get Trolled By Deputy Ajit Pawar? NCP Denies It

"The future of my government is not in the hands of the opposition. The steering is in my hands. A three-wheeler (auto-rickshaw) is a vehicle of poor people. The other two are sitting behind," Uddhav Thackeray had said. 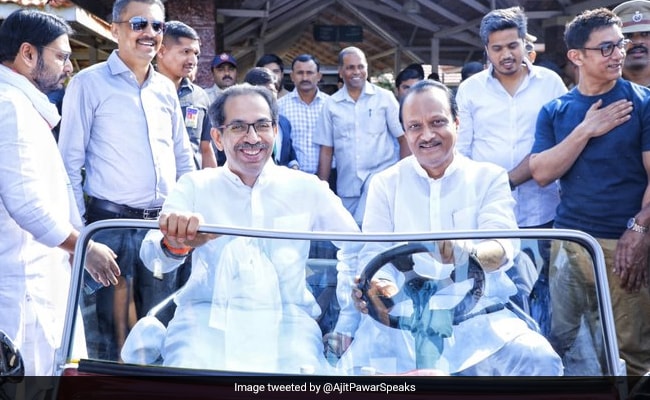 The silent dig at the Chief Minister's "steering wheel" analogy did not go unnoticed, though the NCP denies it was meant as anything more than a heartfelt birthday wish.

"Dada why this pic used to wish CM on his birthday, in which the steering is in your hand...Is this some kind of indication," was among the many questions responding to the birthday tweet.

On Sunday, Uddhav Thackeray had made the statement as a dare to the opposition to try dislodging his government.

Mr Thackeray, whose Shiv Sena tied up with ideologically opposite parties NCP and Congress last year, said the Maha Vikas Aghadi (MVA) government was benefitting from the alliance.

"The future of my government is not in the hands of the opposition. The steering is in my hands. A three-wheeler (auto-rickshaw) is a vehicle of poor people. The other two are sitting behind," Mr Thackeray said in an interview published in the Shiv Sena mouthpiece ''Saamana'' on Sunday, ahead of his 60th birthday.

"Why wait for September-October as is being speculated. Topple the government right now since you get pleasure in toppling. Some people derive pleasure in constructive work while some are happy in destruction. If you feel happy in destruction, go ahead," he said, referring to speculation that after other opposition-ruled states like Karnataka, Madhya Pradesh and Rajasthan, the government in Maharashtra could be in trouble.

In his barbs at the BJP, Mr Thackeray referenced his predecessor Devendra Fadnavis, who had earlier compared the ruling coalition with a three-wheeler, an auto-rickshaw, and questioned its stability.