Smriti Irani has hit back at the Congress over the "missing" posters which claimed that she had registered presence in her constituency "just for a few hours on two days in two years."

Smriti Irani also dared those responsible for the posters to reveal their names. (FILE)

Black and white posters with Union Minister Smriti Irani's photograph popped up in Uttar Pradesh's Amethi, asking for its MP's whereabouts, according to a tweet by the All India Mahila Congress- the women wing of the grand old party.

Now, in a series of tweets, Smriti Irani has hit back at the Congress over the "missing" posters which claimed that she had registered presence in her constituency  "just for a few hours on two days in two years." 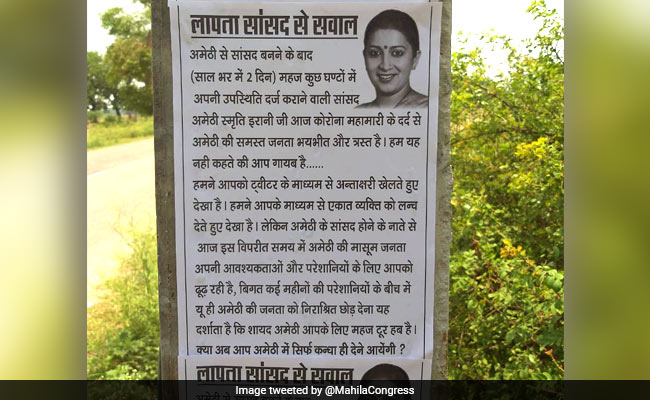 "I have an account of 8 months, 10 times and 14 days," replied the 44-year-old Member of Parliament from Amethi.

In the same tweet, Ms Irani launched an attack against Congress president Sonia Gandhi, asking her about visits to her constituency, Rae Bareli.

Amethi was once known as the stronghold of the Congress as it was represented by the Gandhi family for almost four decades.

The Union Minister, then, went on to give a detailed account of the work she has done for her constituency during the lockdown, which included an estimate of the number of returnees to Amethi and her efforts towards providing the farmers benefits of Prime Minister Narendra Modi's amnesty schemes.

"22,150 citizens have returned to Amethi district by buses and 8,322 by trains so far. I can tell the names of each and every returnee. Would Sonia ji want to give the same account for Rae Bareli?" read her tweet in Hindi.

Giving reason for not visiting Amethi during the lockdown, she said she doesn't want to set a wrong example for people by breaking the lockdown norms herself.

"You want me to break the law and encourage people to get out of their houses so that you can play 'Twitter Twitter. You don't love Amethi, but I do. Stop messing with people's lives," she said in another tweet.

Smriti Irani also dared those responsible for the posters to reveal their names and also attacked them for saying that she will only visit her constituency "to become its pallbearer."

"We have seen you play antakshari on Twitter, give food to some individuals; but the people of Amethi are looking for you to address their needs and difficulties. Leaving the people of Amethi without help depicts that Amethi is just a tour hub for you. Will you only come to Amethi to become its pallbearer?" were the words on the poster.