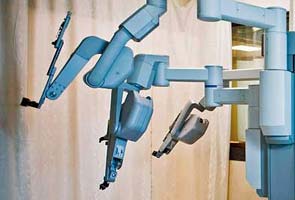 Mumbai: The robotic-assisted prostate cancer surgery, which was aborted on December 6, when the android developed a technical snag and froze, was finally completed successfully on the second attempt made yesterday at the Asian Heart Institute (AHI) in Bandra.

Earlier Mid Day had reported on December 15 how the robot went on the blink minutes before making an incision, even as Mahendra Shah lay unconscious under the effect of anaesthesia. AHI is the first and the only hospital in the city to perform robotic-assisted surgeries. Shah's elder brother said, "His surgery was completed successfully and we are happy that this time there was no glitch."

Promoted
Listen to the latest songs, only on JioSaavn.com
Dr V Shreeniwas, who performed the operation with the help of the Da Vinci surgical system yesterday, said, "The robot's maintenance has been completed, and the surgery was performed today. He will be discharged within three days. Owing to the robotic precision, Shah suffered minimum blood loss and did not even require blood transfusion."