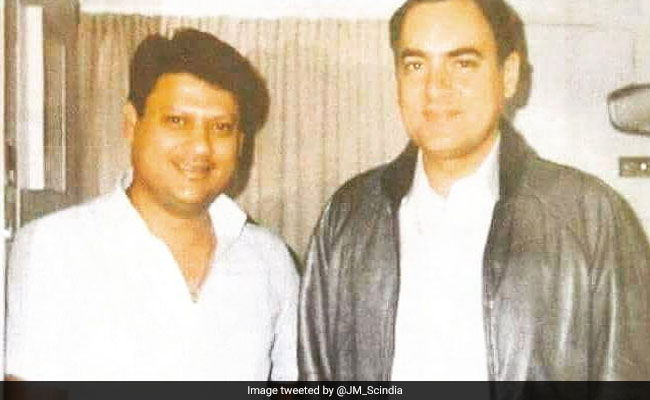 A translation of the poem reads: "We fed all our blood into the ground. We had a debt to pay to our homeland, and the debt has been paid."

Mr Scindia posted the same photo, with a different message, this time last year, describing Rajiv Gandhi as "a man with a vision, who ushered India into the 21st century".

My humble tribute to former PM Rajiv Gandhi ji on his birth anniversary. A man with a vision, who ushered India into the 21st century with IT, telecom and economic reforms, and empowered grassroots democracy through the Panchayati Raj institutions. #RememberingRajivGandhipic.twitter.com/pGf4c0s1GD

Earlier this month Mr Scindia, who lost his Guna parliamentary seat to the BJP in the national election, emerged a surprise backer of the centre's decision to withdraw special status to Jammu and Kashmir, albeit with a rider that said "would have been better if constitutional process had been followed".

Mr Scindia's comment came shortly after he delivered a gentle warning to his party amid the turmoil caused by Rahul Gandhi's resignation as Congress president.

"The party is presently passing through a critical situation. Congress needs to revive and reinvent itself before going back to people again for winning their confidence. I think that moment has arrived," he said, while also ruling himself out of the leadership race.

Meanwhile, several other Congress leaders were present at a prayer meeting in the national capital today to commemorate Rajiv Gandhi's birth anniversary, including former PM Manmohan Singh, who said he was "the one who truly set the direction" for India to enter the millennium with a "progressive, modern and scientific outlook".

Congress leaders Priyanka Gandhi Vadra and Rahul Gandhi posted emotional tributes to their father on their respective social media platforms, thanking him for his service to the nation and valuable life lessons.

Rajiv Gandhi, the nation's sixth Prime Minister, became the youngest to hold the post when he was sworn in at the age of 40, after the 1984 assassination of his mother, former Prime Minister Indira Gandhi.

In May, 1991, he was assassinated in Sriperumbudur in Tamil Nadu, while campaigning ahead of national polls. His death anniversary is observed as Anti-Terrorism Day.