The air quality in Delhi, already categorised as "severe", is expected to plummet further as people burst firecrackers to celebrate the festival. 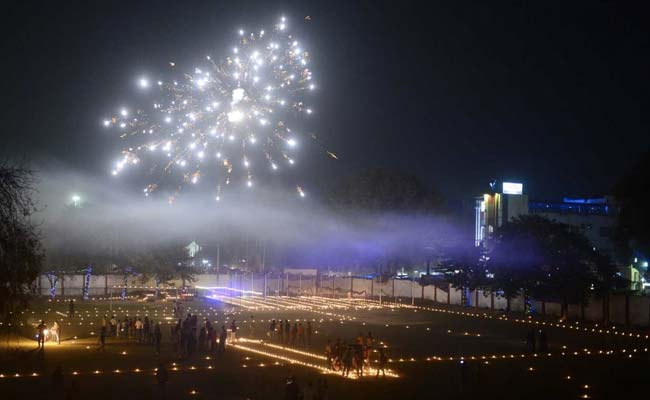 Diwali is being celebrated across  the country today with certain caveats. The top court had last month imposed restrictions on the sale and use of firecrackers in a bid to control air pollution. The court had said firecrackers with reduced emission and decibel levels can be burst for two hours tonight, from 8 pm to 10 pm.

The air quality in Delhi, already categorised as "severe", is expected to plummet further as people burst firecrackers to celebrate the festival. "We are fully prepared. We have formed various teams which will be deployed on Diwali day to monitor the situation. Policemen would be deployed in plainclothes too," Delhi police spokesperson Madhur Verma was quoted as saying by news agency IANS.

According to the police, over 3,847 kg of illegal firecrackers have been seized from various parts of the city since October 23.

Delhi's air quality is expected to deteriorate to "severe plus emergency" category after Diwali on November 8 even if "partially toxic crackers" are burned compared to last year, the Centre-run System of Air Quality Forecasting and Research or SAFAR has said.

E-commerce websites, including Flipkart and Amazon, have been directed not to sell fireworks online. Any attempt to do so will attract the wrath of the court, including monetary penalties.

However, experts point out that green crackers can only mitigate the effect of pollution, and not completely eradicate the menace, news agency ANI said. "Green cracker is still a cracker. By using these sought of crackers you can only reduce the effects of pollution but cannot eradicate air pollution. At present, we need total elimination of the harmful effects of air pollution," said former Indian Medical Association (IMA) president KK Aggarwal opined.

He said the situation in Delhi is very alarming. "There is a flood of pollution waves in Delhi. This can only be tackled if the all the political parties come together take necessary action instead of playing the blame game," he added.

Southern states including Tamil Nadu, Kerala, Karnataka and Andhra Pradesh celebrated the festival yesterday. However, in Tamil Nadu, several cases were registered against those who burst firecrackers  in violation of the two-hour time frame imposed by the Supreme Court for bursting them. The Supreme Court had modified its order for the southern states, allowing it to decide the time slot. Accordingly, the Tamil Nadu government fixed the time for bursting crackers between 6 am to 7 am and 7 pm and 8pm, confining the revelry to two hours in line with the top court directive.