On Bal Thackeray's death anniversary, focus on his makeshift memorial 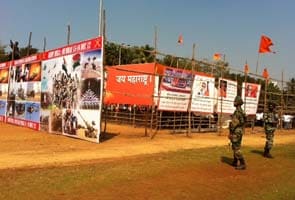 His party  has been told repeatedly to dismantle the controversial makeshift memorial that came up on the platform where Mr Thackeray, aged 86, was cremated on November 18.

Today, the Sena made it clear it's not about to follow orders without some guarantees.

"We want written permission identifying the final spot for Bal Thackeray's memorial before we move the makeshift structure at Shivaji Park," said party leader Sada Sarvankar. "Today, we are expecting people to pay their respects the entire day. Whatever is to happen may after late evening today," he said.

The state government has made it clear that the permission for the structure that was used for Mr Thackeray's cremation was temporary, and has said the party must remove the memorial, which has garlanded photographs and posters of the politician.

"We have given options of a few places for the memorial," said Mr Sarvankarm adding that he expects word today on alternate locations from the BrihanMumbai Municipal Corporation or BMC. "The final spot, we believe, will be at Shivaji Park," he stressed.

The city's corporation is governed by the Shiv Sena. Its commissioner, Sitaram Kunte, who had sent notice to Sena leaders to remove the memorial, has not responded to any of the questions a new location for the memorial.

Promoted
Listen to the latest songs, only on JioSaavn.com
Party workers say nobody apart from Mr Thackeray's son, Uddhav, who has taken over as Sena chief, knows when the memorial will be moved. "Let Uddhavji tell us what is to be done. We will follow only his instructions, no other leader knows," said Prakash Patil, a Sainik for four decades.