'Agnipath' violence: "Everyone has a right to protest, there's nothing wrong in that...but the administration not doing anything to stop attacks on a leader's property, this is not right," said Bihar BJP chief Sanjay Jaiswal, whose home was vandalised by protesters 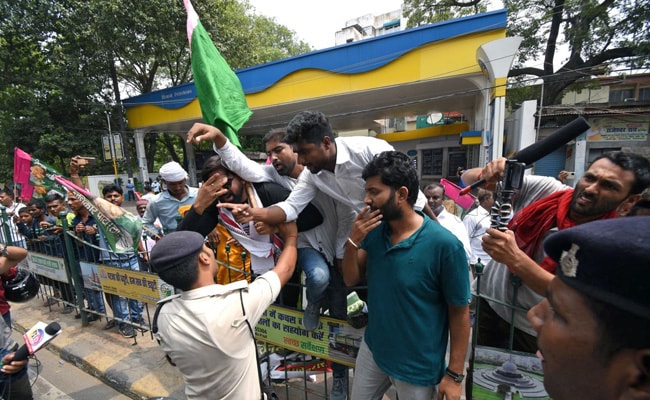 'Agnipath': Protests have been going on in Bihar over the new policy (PTI)

Bihar's BJP chief, whose home was vandalised by 'Agnipath' protesters, has criticised the state government over what he called inadequate efforts to stop violent protests in the state. In his strong comments, state BJP chief Sanjay Jaiswal specifically hinted at Chief Minister Nitish Kumar, whose Janata Dal (United), or JDU, is in alliance with the BJP in the state that has been seeing widespread protests for a fourth day over the new military recruitment scheme 'Agnipath'.

"When we called the fire brigade, they said fire trucks will come only if the local administration officer allows it," a visibly upset Mr Jaiwal told reporters today, alluding to inaction by state officials to prevent the attack at his home in Bihar's Bettiah town on Friday.

"Everyone has a right to protest, there's nothing wrong in that, we all have different views. But giving protesters a free hand, the administration not doing anything to stop attacks on a leader's property, this is not right," Mr Jaiswal said, adding there were at least 300 policemen in town, yet they did not stop the violence.

"We are part of the state government alliance, but something like this has not happened anywhere in the country, it is happening only in Bihar. As a leader of the BJP, I condemn this incident and if this is not stopped, it won't be good for anyone," the Bihar BJP chief told reporters.

"The central government took a decision. There are protests in other states too. Young people are concerned about their future, so they came out to protest. Of course violence is not the way. We can't accept violence. But the BJP should also listen to what is worrying these young people, their concerns. Instead, the BJP is blaming the administration. What would the administration do?" Mr Ranjan said in a video statement.

The protests, meanwhile, continues in some states, the most intense being in Uttar Pradesh, Telangana and Bihar. The centre has announced several concessions amid the protests. There will be a 10 per cent quota in Defence Ministry jobs, spread across the Coast Guard and defence civilian posts, and all the 16 defence public sector undertakings. This reservation would be in addition to existing reservation for ex-servicemen.

On top of all this, the government announced 10 per cent reservation for 'Agniveers' in the Central Armed Police Forces, or CAPFs, and the Assam Rifles, which comes under the Defence Ministry.