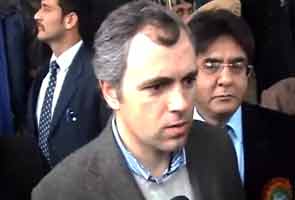 "We have decided to give the youths a second chance. Cases against all the youths arrested on charges of stone-pelting, but not involved in arson, registered during last year's disturbance will be withdrawn," Omar told reporters here.

He said the criminal record of the youths will be cleared and they will get another chance to build a better future.

"(However,) the cut-off date for amnesty is today.... we cannot do it again and again. Anyone arrested till today on stone-pelting charges can avail this amnesty," Omar said.

Geelani has threatened to launch an agitation after Eid if the government did not fulfill his demand.

The Chief Minister said it was an Eidi (Eid gift) from his government to the youths, who were led astray and provoked into protests during last year's unrest.

"We are ready to forgive... we have learnt our lessons and now the youths also have to learn their lessons. Those who incited them last year are willing to agitate for the release of their colleagues but have forgotten the stone-pelters," Omar said.

The Chief Minister said those youths, who have cases registered against them in connection with stone-pelting but have been evading arrest can also avail of this amnesty.

"Their parents should get bail for them (from the court) and then we will consider them as well," he said.

Giving details of the cases registered last year, Omar said 1,300 cases were registered but less than 100 of these were related to incidents of arson.

"An impression is being created that thousands have been arrested and our jails are packed. There are 35 persons detained under Public Safety Act (PSA) and 70 others are in judicial custody," he said.

The Chief Minister said the separatists were making claims that the protests last year were peaceful but the incidents of violence that took place suggest otherwise.

Promoted
Listen to the latest songs, only on JioSaavn.com
Omar said 62 vehicles, including 37 owned by the government, were burnt down while 160 other vehicles were damaged during protests.