Railway Minister Ashwini Vaishnaw, who was also in Puri, shared a video of him bowing down before the Nandighosh Chariot of Lord Jagannath. 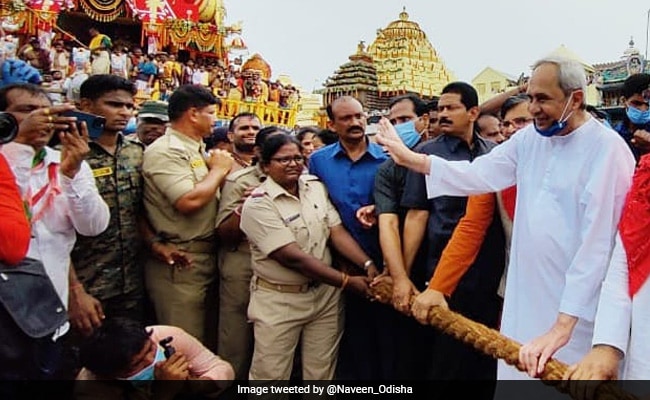 Devotees were allowed to participate in the Rath Yatra after 2 years due to the pandemic.

Vibrant celebrations and colourful processions marked the first day of Ratha Jatra in Puri, with political leaders and other dignitaries descending on the roads of the temple town to pay obeisance to the Trinity, along with a sea of revellers.

Mr Patnaik, who returned from his 11-day tour to Italy and Dubai early morning, rushed to Puri for 'darshan' of the divine siblings -- Lord Jagannath, Lord Balabhadra and Devi Subhadra.

He waved to the crowd as people cheered for him.

"The Grand Trunk Road adjoining the temple came alive with celebrations as emotion and enthusiasm were palpable among the devotees," Mr Patnaik said on Twitter.

Mr Pradhan, too, took to the microblogging platform to say that Rath Yatra was all about "universal love and humanity".

"Fortunate and overwhelmed to seek blessings from Mahaprabhu on this special and auspicious day in Puri. May he bless us all. Jai Jagannath," he wrote.

Railway Minister Ashwini Vaishnaw, who was also in Puri, shared a video of him bowing down before the Nandighosh Chariot of Lord Jagannath.

Happy Rath Yatra to all.

Several other state ministers, MLAs and MPs, took to the streets in the pilgrim town to join the revelry.

Devotees, after a hiatus of two years owing to COVID-19 pandemic, were allowed to participate in the Rath Yatra celebrations, much to their delight.

The administration has deployed 180 platoons of police force, teams of fire fighters and life guards in the beach town to tackle possible incidents of drowning in the sea.