"Naveen Babu Does Not Understand": PM Slams Odisha 'No' To Health Scheme 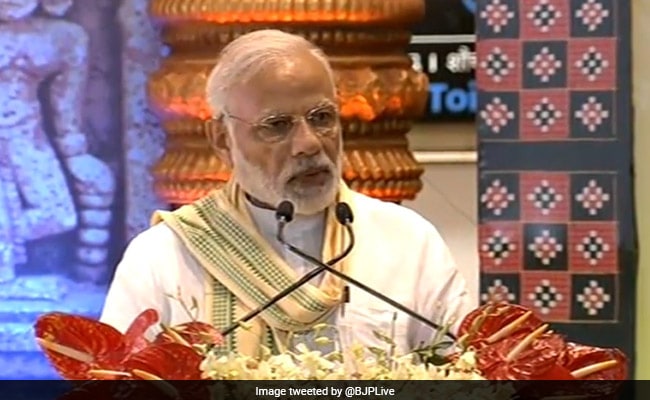 Mr Patnaik, however, dismissed the allegation on corruption, saying PM Modi must have said it to enthuse BJP workers.

The war of words between PM Modi and Mr Patnaik comes ahead of the Odisha assembly polls and general elections next year.

Stepping up his criticism of the Patnaik-led government, PM Modi alleged that a "PC" (percentage commission) culture and delaying decisions have become the identity of the Odisha government resulting in the state's tardy development.

The prime minister said PC impacts implementation of housing and toilet schemes and other welfare projects.

There have been allegations of corruption in sapling plantation, polythene packaging of milk, road construction and irrigation, he alleged.There are allegations of widespread corruption with involvement of people from the ruling party, PM Modi said, adding, "how can development take place under such a situation."

Reacting to PM Modi's remarks, Mr Patnaik said the Centre should rather think about the "scam" in the skill mission and Ujjwala schemes.

"In fact, they should be thinking about their skill mission scam and Ujjwala scheme scam .. They should be considering that," the chief minister told reporters on returning from Jharsuguda, where he was with Prime Minister Modi at the inauguration of a new airport.

The Centre should also seriously think about the record increase in prices of petrol and diesel because of which the people of the country are suffering, the BJD president said.

On the Ayushman Bharat scheme, Mr Patnaik said the state's scheme is better than the centre's as it covers an extra 50 lakh people and provides Rs. 7 lakh to women as against Rs. 5 lakh by the central programme.

Similarly, an extra 25 lakh poor people are covered under the food security scheme in the state, he said.

The Odisha government has not joined the central scheme and instead gone for Biju Swasthya Kalyan Yojana.

Noting that rural cleanliness in Odisha was only 10 per cent in 2014, Prime Minister Modi said it has increased to 55 per cent but a lot more was needed to be done.

"I had told Naveen ji about the importance of Swachhata and I once again request him to give cleanliness due importance," PM Modi said, adding, cleanliness is essential for good health.

"Everyone is aware of the importance of Ayushman Bharat scheme, but Naveen babu does not understand. The Odisha government should come forward and join the programme," he said.

The prime minister will launch the programme countrywide from Jharkhand tomorrow. The scheme aims to provide Rs. 5 lakh health insurance coverage per family annually to more than 10 crore poor households.

Claiming that the BJP-led NDA government has been supportive to Odisha, Modi said, "While the previous UPA government could allocate only Rs. 80,000 crore, the NDA government on the other hand has given Rs. 2 lakh crore in the last four years."

However, the people of Odisha are not getting benefits from the central allocations at the ground level as the state has been "indifferent". "Where is the central fund going," he asked.

The prime minister said there was a need for "bade parivartan" (big change) to give pace to Odisha's development.

Pointing towards a large crowd gathered at the BJP public meeting in Talcher, he said it "clearly showed" what the people of Odisha think.

Targeting the Congress, Modi referred to former prime minister Rajiv Gandhi's famous remark that only 15 paisa out of a rupee sanctioned by the Centre for welfare of people reaches the intended beneficiaries. "They knew about the 'bimari' but had no vision to solve it," he said.

The BJP government's decision to directly transfer money to the bank accounts of beneficiaries has curbed the practice of middlemen in implementation of welfare schemes, PM Modi said. "If our government releases Re 1, entire 100 paise reaches the poor," he said.

He said justice will be done to Muslim mothers and sisters.

The ordinance on triple talaq has made the practice illegal and three days ago the Centre took a decision that was required for decades, PM Modi said.