No untoward incident was reported from any part of the state and polling for the first of four-phase of Odisha elections was undertaken peacefully, Chief Electoral Officer (CEO) Surendra Kumar said. 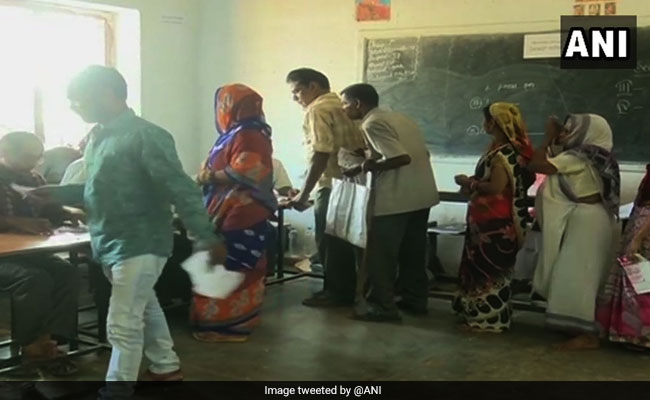 Long queues of voters were seen at polling stations in 4 Lok Sabha constituencies and 28 assembly seats.

Brisk polling was recorded in Odisha Thursday with around 70 per cent of the over 60 lakh electorate casting their votes in four Lok Sabha and 28 Assembly constituencies.

No untoward incident was reported from any part of the state and polling for the first of four-phase of Odisha elections was undertaken peacefully, Chief Electoral Officer (CEO) Surendra Kumar said.

However, there were reports of poll boycott by villagers in some places over local issues, while zero polling was recorded in some Maoist-hit areas of Malkangiri district, he said. "Around half-a-dozen booths in Chitrakonda area of Malkangiri recorded "zero polling," the CEO said.

In Kalimela block of Malkangiri district, a man, who was waiting to vote outside a booth, collapsed and died, apparently due to scorching heat, a police officer said.

The man has been identified as Bhima Kabasi, 45, of MPV-74 village in the district, he added.

As per reports received from the constituencies, approximately 70 per cent of the electorate has cast their votes, an official in CEO's office said.

However, the exact figure is yet to come and the turnout is expected to rise as the polling teams are on their way back, he stated.

In several Maoist-affected areas, long queues of voters were seen outside the polling stations, he said.

"Of the 28 assembly constituencies that went to polls Thursday, 20 were in Maoist-affected areas of the state. Barring six to seven booths in Malkangiri, where no votes were polled all day, people came out in large numbers in the Maoist belts to exercise their franchise," the CEO stated.

Similarly, the election office has also received reports of "poll boycott from a couple of places", where people chose to skip voting over various local issues and demands, he said.

The CEO asserted that the election department officials have attended to all reports of technical glitches in Electronic Voting Machine (EVM) operations.

"In 7,233 EVMs, only 169 VVPAT, 62 ballot units and 65 control units had to be replaced, which is negligible. All poll personnel have undergone extensive training to attend to such glitches," he said.

Admitting that the poll process was delayed in some booths of Koraput, Kalahandi, Nabarangpur and Berhampur districts owing to the glitches, Mr Kumar said the process, however, picked up pace after corrective measures were taken.

"For the first time in the state, 18,500 braille ballot papers were made available at the booths to aid visually impaired voters," the CEO said, adding that arrangements were also made to provide wheelchairs to the differently-abled and elderly persons.

Prominent among those who voted on Thursday were former union minister Chandra Sekhar Sahoo, who is the BJD candidate from Berhampur Lok Sabha seat and BJP Odisha unit president Basant Panda, also in the fray from Kalahandi Lok Sabha seat.

Lok Sabha and Assembly elections are being held simultaneously in Odisha in four phases.