"Grow Up": Ajay Maken Hit Out At BJP's Vijay Goel For Defying Odd-Even

Ajay Maken's remarks came after Vijay Goel and Delhi BJP in-charge Shyam Jaju travelled in an odd number car from the former's residence to ITO, on a day when only even number cars were allowed on the roads. 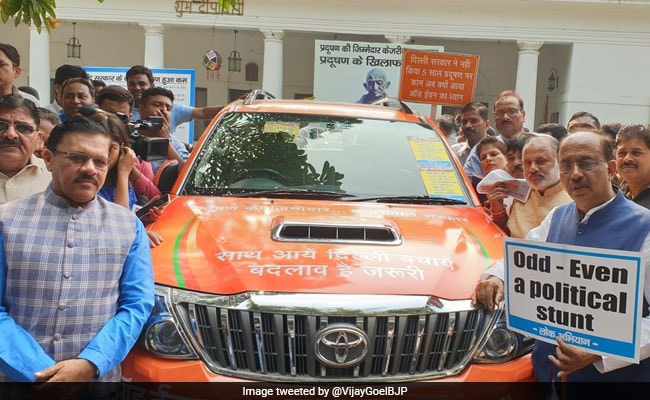 Vijay Goel had also violated the first edition of Odd-Even scheme in 2016 and paid a penalty of Rs 2,000.

Congress leader Ajay Maken on Monday slammed BJP MP and former Union minister Vijay Goel for defying the Odd-Even scheme in the national capital and asked him to "grow up".

Maken's remarks came after Goel and Delhi BJP in-charge Shyam Jaju travelled in an odd number car from the former's residence to ITO, on a day when only even number cars were allowed on the roads.

"Vijay Goel MP - A law maker! Is deliberately driving an odd number car on an even numbered day. As a law maker - how can he deliberately break the law? I've been the most vocal critic of (Delhi Chief Minister) Kejriwal. But, I will never contribute to air pollution as a way of protest. Grow up Vijay Goel," Maken tweeted.

The third Odd-Even car rationing scheme aimed to provide relief from pollution kicked-off on Monday. The scheme will remain in force till November 15 and the rules for this will be applicable in Delhi from 8 a.m. to 8 p.m.

Violation of the scheme will attract a penalty of Rs 4,000, which is double the amount charged in the earlier editions of the scheme.

(Except for the headline, this story has not been edited by NDTV staff and is published from a syndicated feed.)
Comments
ajay makenVijay GoelOdd Even Scheme 2019