"Time We Ended This Violence": Nusrat Jahan Calls For Peace In Bengal

The first-time lawmaker made the appeal after meeting a woman injured in political violence at a Kolkata hospital. 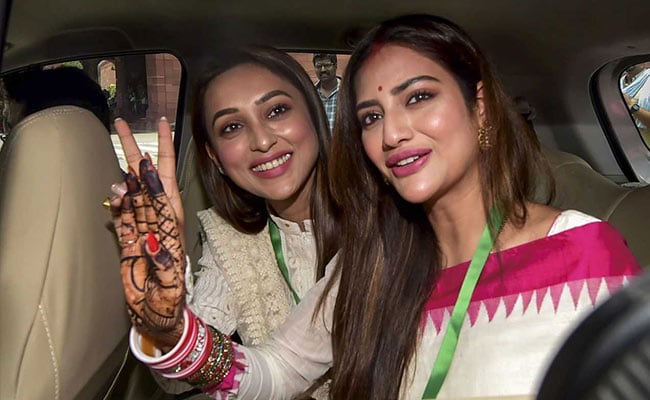 Nusrat Jahan with Mimi Chakraborty on the parliament premises.

Trinamool Congress lawmaker Nusrat Jahan, who has made a splash with her debut in parliament, today called for an end to political violence in Bengal.

"In Bengal, women were always respected. It is time this violence came to an end. I am asking you to stop with folded hands," the actor-turned-politician appealed after visiting the pregnant wife of a Trinamool Congress worker from her constituency -- Basirhat -- at a Kolkata hospital.

The woman, Ila Mondal, used to reside with Trinamool worker Gopal Mondal at Rajbari village in North 24 Parganas, an area that has been tense ever since three people died in a BJP-Trinamool Congress clash last month. On Saturday, he got into a brawl with three BJP activists over building a fence.

The next day, while her husband was away, Ila Mondal was fixing the disputed fence when the BJP workers allegedly kicked her in the stomach. The six-month pregnant woman had to be rushed to a local hospital with stomach pain and breathlessness.

Nusrat Jahan went on to say that the Trinamool Congress government will not stand by and watch while West Bengal is being consumed by political violence. "Action will be taken against anybody involved in violence. We will restore law and order in the state immediately," she added.

The woman's condition has been stabilised, the first-time parliamentarian said.

Incidents of violence between BJP and Trinamool workers have increased after a bitterly fought election in which the saffron party ended up winning 18 of 42 Lok Sabha seats -- only four behind the Trinamool's 22. Mamata Banerjee's party had won 34 seats in the 2014 polls.