According to varsity officials, the programme was supposed to be held within 100-metre periphery of the varsity's administrative block, which would have been against the high court's ruling in 2017. 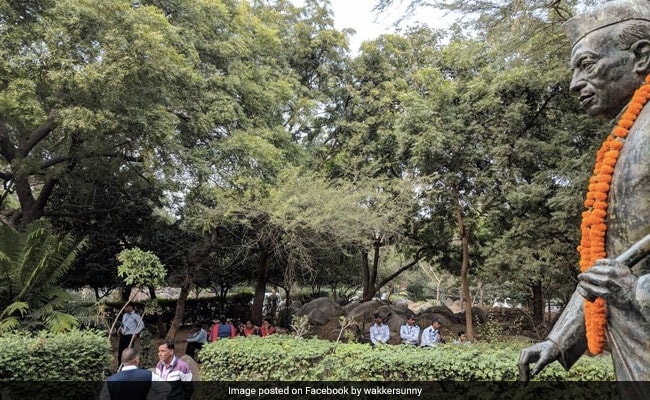 NSUI member shared photos of the venue and the letter he received from JNU admin.

A member of the National Students' Union of India (NSUI) on Wednesday accused the Jawaharlal Nehru University Administration of "stopping a Facebook Live" on Jawaharlal Nehru on his birth anniversary.

According to varsity officials, the programme was supposed to be held within 100-metre periphery of the varsity's administrative block, which would have been against the high court's ruling in 2017.

"We were not against the programme but the venue was not appropriate because of the high court directions and academic regulations," JNU registrar Pramod Kumar told PTI.

Last year, the Delhi High Court had asked the JNU students not to protest within 100 metres radius of the administrative block, which houses several offices, including that of the vice chancellor.

"#JNU_Admin #Stops a mere #facebook_live on Nehru !! On the birth Anniversary architect of Modern India, 14 November. I have got a warning letter from JNU admin. Do not dare to speak the Truth, (they subtlely meant, don't expose RSS). Iqbal's couplet seems quite relevant here," NSUI's presidential candidate for the 2016 students' union polls Sunny Dhiman posted on Facebook.

He also shared a letter from the varsity administration addressed to him. The Facebook Live was supposed to happen near the statue of Jawaharlal Nehru outside the administrative block.

"It has come to the notice of the Administration that a programme 'Nehru-Kya Sach Kya Jooth' is being organised by Ms Priya Kumari (page Admin) at Administrative Block, JNU, on November 14  at 4 pm and you are one of the speakers in the said programme," the letter addressed to Dhiman from JNU registrar Pramod Kumar said.

"You are requested not to address the said meeting as its venue falls in the close vicinity of Administrative Block, which is a prohibited area within the University campus for holding such activity. This is in violation of Academic Rules and Regulations Etc and also directives from the high court," it said.

According to Academic Rules, all the forms of coercion such as gheraos, sit-ins or any variation of the same which disrupts normal  academic and administrative functioning of the university are prohibited.

"Hunger strikes, dharnas and other peaceful and democratic forms of protest & group bargaining shall be conducted with restrain, i.e at a distance of 100 meters away from the Administrative & Academic complexes," according to the Academic Rules.