"Nothing Will Stop Me": Woman Who Entered Sabarimala Resolve To Do It Again

Bindu and Kanakadurga have also filed contempt petition against the temple ''Thantri'' and authorities. 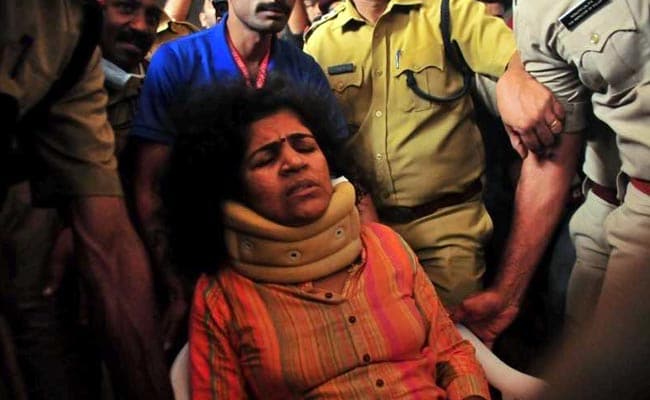 Two women were the first to enter Sabarimala and were thrown out of their homes later. (File)

Two Kerala women -- Bindu and Kanakadurga -- who are facing social boycott and exclusion for entering the Sabarimala shrine, told the Supreme Court on Wednesday about their resolve to enter the temple again on its opening on February 12.

"They are facing social exclusion as well as social boycott for just entering the temple as allowed by the Supreme Court in its verdict," senior advocate Indira Jaising, appearing for the women, told a five-judge constitution bench headed by Chief Justice Ranjan Gogoi.

Ms Jaisingh told the bench, also comprising Justices RF Nariman, AM Khanwilkar, DY Chandrachud and Indu Malhotra, that a case for review of the September 28, 2018 judgement is not made out and there is no law which can stop women from entering the shrine.

"My right of practice and professing any religion is protected under the Constitution. Nothing can stop me from having a darshan of Lord Ayappa and entering the temple under the law," she said, adding that exclusion is derogatory to the dignity of women and hurts the core of the principles enshrined in the constitution.

Bindu and Kanakadurga have also filed contempt petition against the temple ''Thantri'' and authorities.

Ms Jaising said that after the two women succeeded in entering the temple, a purification ritual was carried out in the temple which was in violation of the top court order.

"Menstruating women who entered the temple were considered as polluting and that's why not allowed to entry in the temple and this purification ritual violates Article 17 of the Constitution which deals with untouchability," she said.

The senior lawyer said that untouchability word did not exist in English language until the 19th Century and therefore this word now needs legal interpretation.

"Why the word untouchability is in the Constitution itself," she argued.

She said in India there is concept of private temple but Sabarimala temple is considered to be a public place and therefore to say that Article 15 (2) of the Constitution does not apply is incorrect.

Referring to the dissenting views expressed by Justice Indu Malhotra in last year's September 28 verdict, Ms Jaising said the judge has considered the devotees of Lord Ayyappa as religious denomination.

Ms Jaising questioned the judge relying on the minority verdict of the top court to differ with the majority 4:1 verdict allowing entry of women of all age groups into the shrine.

She said that a case of review of the last year verdict is not made out as it is in the nature of appeal.

"Gender justice is one of the main features of the Constitution. The Sabarimala temple is opening on February 12 and the court should issue a writ of mandamus so that the petitioners who have applied to visit the temple through online system can be allowed the entry," she said.

Ms Jaising brought to the notice of the bench that Bindu, a dalit Hindu woman after entering the temple was facing social boycott and exclusion to the extent that even the shopkeepers are asking her to stop visiting their shops.

Her mother also received a death threat because of her daughter making it to the Sabarimala shrine, she said.