"Not Saying No Inflation": Finance Minister In Rajya Sabha On Price Rise

The Trinamool Congress staged a walkout during the finance minister's speech. 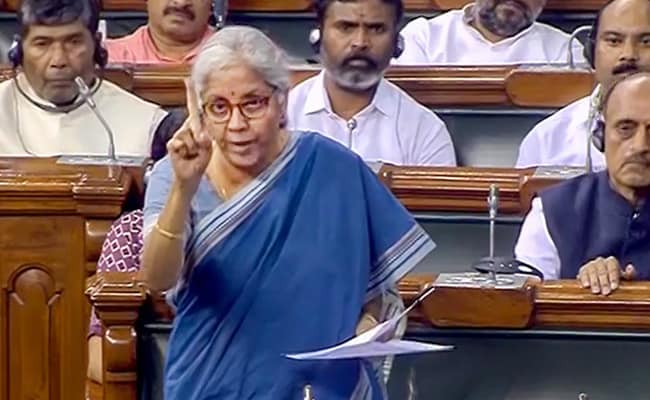 Union finance minister Nirmala Sitharaman, responding to the debate on price rise in Rajya Sabha today, said India's macroeconomic fundamentals are strong. She also argued against the opposition's contention that the government is in denial about price rise. "We are not saying there is no inflation... We are at 7 per cent (inflation rate) now because of some effort by Reserve Bank of India and the government," she said.

The opposition parties in Rajya Sabha had appealed to the government to acknowledge and address the problem of rising inflation, which is hitting the poor. The ruling BJP, however, asserted that the problem was a fallout of global development beyond the control of any country.

"We will see the numbers and what are the ground realities also. We are not running away," Ms Sitharaman said, and then went on to compare the current vegetable prices with that of 2013.

Talking of the opposition's complaints about the levy of Goods and Services Tax on some fresh items, including unbranded goods and packaged items, the minister said no tax has been levied either on cash withdrawals from bank accounts or on crematorium or hospital beds and ICUs.

"GST has not increased the burden on families. The rate (of taxation) on some of the items prior to GST was far higher," she said.

Regarding GST on essential items and unpackaged food, like wheat, rice, pulses, curd, paneer, lassi, Ms Sitharaman said the 5 per cent tax is only on pre-packed and labelled commodities and not those sold loose and hence does not impact the poor. "The food items consumed by the poor is not taxed," she said.

The Trinamool Congress staged a walkout during the finance minister's speech. Ms Sitharaman, party MP Dola Sen said, had made an unnecessary reference to West Bengal, accusing it of levying GST on paneer. When party MP Derek O'Brien asked for a Point of Order, it was not granted.

"We walk out in protest. You don't want to give us a chance to speak," Mr O' Brien said.

"We expected Finance Minister to respond to 6 specific issues we raised. SHE DID NOT. She was more interested in running down Opposition States rather than looking for solutions to #PriceRise #GST," Mr O'Brien tweeted later.

On the Centre's recent decision to impose 5 per cent GST on unbranded and packed food Items, Mr O'Brien said the finance minister had said that all states had agreed in the GST Council.

"This is not true. The Supreme Court has said GST is just a recommendatory body. It is not binding on the government. In September 2013, Prime Minister Narendra Modi said common people are being affected by the rising prices. Today, we agree with the Prime Minister. But the government is insensitive," he added.

The Samajwadi Party has demanded the withdrawal of 5 per cent GST on unbranded and packed food items.

"I have demanded that the Finance Minister announce the withdrawal of GST imposed on food items. The government can give relief to the poor by charging more tax from rich," Samajwadi Party's Ram Gopal Yadav told NDTV.