Not poor if you earn Rs 32 a day: Planning Commission 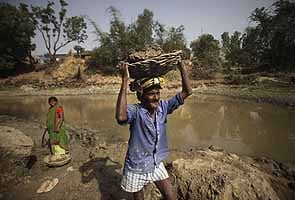 The Planning Commission, in an affidavit, said that the BPL population at present touched by the Public Distribution Services (PDS) was 35.98 crore.

"If the Tendulkar (committee) poverty ratio for 2004/05 is applied to the projected population of the Registrar General of India as on March 1, 2005, the total BPL population would be 40.74 crore," the affidavit said.

The poverty estimates for year 2009-10 were being worked out and the "provisional estimates suggest that the total BPL population as per 2009-10 estimation may be lower than that which would have emerged (on the basis) of Tendulkar ratio on 2004-05 projection", it said.

The Planning Commission filed the affidavit in pursuance of the May 14 order of the apex court bench of Justice Dalveer Bhandari and Justice Deepak Verma, which said that according to the expert group headed by Suresh Tendulkar at the price level of 2011, it was impossible for an individual in urban and rural area to consume 2,100 calories in Rs 20 and Rs 15, respectively.

The bench's order asked the Planning Commission to "revise norms of per capita amount looking at the price index of May 2011 or any subsequent dates".

"At June 2011 price level, for a family of five, this provisional poverty line would amount to Rs 4,824 per month in urban areas and Rs 3,905 per month in rural areas," the affidavit said.

Promoted
Listen to the latest songs, only on JioSaavn.com
The affidavit said that the final poverty line following the Tendulkar Committee ratio would only be available after completion of the 2011-12 National Sample Survey (NSS) and this would vary from state to state because of price differential.