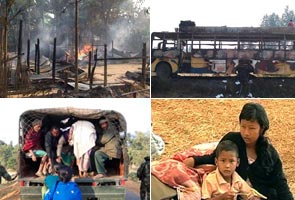 Guwahati: Considering 'conflict resolution' is amongst the most profitable and fashionable round table topic, the recent Garo-Rabha conflict in India's North East can challenge the fashionable resolution theories.

Zoom in on the right arm of a map of India's North East and the districts of Goalpara in Assam and East Garo Hills in Meghalaya are prominently marked. On either side of this political divide the two communities Garos and the Rabhas have been living for centuries. Most people have no recollection of any violence between them. A village headman Subhas Rabha, however, told us that in 1976 there was an incident and friction between the two communities. (Read: 103 people arrested in Northeast ethnic clashes)

For someone who has not visited the North East, the quick introduction to this cauldron maybe through the stories of assertion of ethnic identities through violence and demand for autonomy and even statehood in some cases. At the last count, I think, there were 238 ethnic groups. We are not even taking the sub-groups into account.

A little background sometimes helps. The Garos are one of the three principal tribes of Meghalaya. Garo Hills is not by any standards a developed area despite one of the longest serving Member of Parliament voted from those hills. Garos have also dominated politics in Meghalaya and the state's first Chief Minister was a Garo and its present Chief Minister is from Garo Hills as well. So the tribe should have benefitted from political patronage if not from basic welfare policies. They have received neither.

Rabhas are a tribe who have been hardly represented. Most development markers don't even apply to them.

Sometime in mid-nineties the Garos and Rabhas had together demanded for a tribal council but in recent years the Rabhas started asserting their own 'Rabha Hasong' or in other words a political framework which will bring them inside the Sixth Schedule of the Constitution. This has isolated them from other tribes inhabiting that area as well as the non-tribals - a demand that every ethnic groups aspires in this part of the country. Autonomy not only grants political power but brings in a good cheer. In this case its development fund which they spend on their own and that is what motivates the people. But it spawns corruption as well. North Cachar Hills Autonomous Council of Assam is India's oldest Autonomous Council and is running on a ventilator or sorts after allegations of massive corruption. The NIA and CBI is now investigating into how development fund have been diverted by a terrorist-politician nexus.

These ethnic groups are generally backed (in this demand) by underground militant groups and overground surrendered militants belonging to the respective tribe.

Garos have at least one armed group on ceasefire, ANVC, and a newly formed GNLA. The Rabhas have an ineffective Rabha Viper Army which is more like a band of petty dacoits. One of ULFA's commanders, Dristi Rajkhowa, is a Rabha and has a certain amount of influence over these groups. Besides militants, the student unions of respective tribes and communities in these parts play a very strong political role. I am giving this background because the demand for autonomy and the differences within that demand may have been an underlying cause for the recent violence. Four hundred sixteen Garo villages fall in the area where the Rabhas have been demanding autonomy, so it makes political sense for Garos to clear those villages so that the Rabhas claim over that area can be challenged. Conflict resolution experts will of course have their own analyses but let me tell you what I saw on the ground.

The year 2011 for Assam had a strange beginning. In the first light of this new year the Chairman of a banned armed outfit responsible for the death of thousands of innocent people was let off by the government. He was garlanded, his supporters shouted slogans and he walked out to his freedom without once regretting the murders he ordered.

A day later, news from the Assam-Meghalaya border arrived sometime in the evening. All night a few enthusiastic Army officers with their men patrolled the district as news of arson started trickling in. People were fleeing their homes but the civil administration was asleep. It was midnight you see. The Army was caught in a bit of a situation. They don't have the mandate to get drawn into an ethnic conflict. They are here strictly for counter insurgency operations. But here was a young officer in his post and hundreds of petrified villagers were seeking help. Despite a hate-Army campaign in the region, the fatigue instills more confidence than the khaki. The Army, to my knowledge, did everything that a human being is expected to do at that point. They provided food and some blankets and tried to manage the situation without getting involved.

I believed that it was a localised violence and will die down. So I slept over it like the civil administration. On January 5, when I visited the place, villages were aflame. I could hardly believe what I witnessed. I turned around and it was either smoke billowing out from a forest cover where a village may have been set on fire, or a house where the entire season's harvest was carefully stored and now all will be gone. Pages from school text books were flyash and a traumatised puppy I found was caught in the raging flames. A pregnant pig lay in a pool of blood. The rioters wouldn't spare the livestock either. I saw people wielding farm implements as weapons and insanely running towards fleeing unarmed neighbours. They were ready to take on anyone and everyone. But conspicuously the police and civil administration was missing in action. I have no idea why. (Read: Meghalaya announces compensation)

The Garos were setting Rabha houses on fire. The genesis of this clash may be the demand for autonomy but the immediate trigger was a bandh call by the Rabhas during Christmas and some Rabha groups beating up a pastor and pelting stones at revellers. An uncalled for provocation. The retaliation was swift and violent. But not without instigation and an organized attack followed. Later, a Garo Students Union functionary was apprehended by the Army so there was evidence of their involvement. The Rabhas too started hitting back.

It was like a believe-it-or-not passive state government. The two chief ministers of Assam and Meghalaya were in New Delhi and both claimed to be in sync but on the ground neither was visible. Meghalaya was a shade better but in Assam it was almost a case of state sponsored riots. By January 7, Assam admitted that 29,000 people have been displaced and are in relief camps. The authorities said that 340 houses were gutted in fire, and seven people died in the fighting. A few more were killed later.

In the final count, 50,000 people were displaced from their homes across the divide and at least a thousand homes lost. What I saw angered me because this violence was a result of provocation but the scale and intensity was almost engineered by apathy and inefficiency of elected governments.

Conflict resolution experts will argue with examples and templates and contend that anecdotal references do not help in understanding the reason for conflict. But this is no ordinary conflict. Without having to go to the details, the broad canvas was about two communities without a history of violence suddenly killing each other and an administration watching from the wings. I haven't even related the pathetic condition of most of the relief camps where even baby food was not available. Sanitation was poor. Medicines were provided but food was inadequate. And strangely, even the local politician was not to be seen. Something definitely was amiss. A bunch of Armymen, powered by individual willing to help, were all out trying to diffuse the situation without any clarity of what their role was in it.

Resolution came about on the evening on January 10. I have witnessed ethnic conflict and internally displaced people across the North Eastern map from the Brus in Mizoram to Hmars in N C Hills, the Bodo Adivasi clash, the Karbi Dimasa clash but never have I woken up to such a simple resolution. The administration was shaken up and things were picking up. New Delhi sent its emissary to crack the whip. Paramilitary forces finally arrived. It took them 10 days and mind you the place we are talking about is two hours from Guwahati which has loads of paramilitary forces engaged in VIP duty. Army vehicles started ferrying the people back to their villages. Ten days of frenzy and the young Army officer who served food to fleeing villagers on the first night of horror was now narrating the most amazing scenes of tearful embrace between the Garos and Rabhas finding their way back to their homes. They have started rebuilding their lives. Fifty thousand is a lot of people and may take a while but the beginnings are already an example by which conflict resolution theorists may want to rethink on their templates. (Read: Central forces reach Assam, Meghalaya)