Nobody would bid for Bengal: Mamata Banerjee's controversial lament 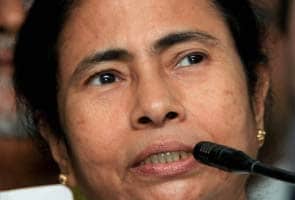 Kolkata: If West Bengal is put up for auction, no one will buy it! This statement by the chief minister, Mamata Banerjee, lamenting the state's financial condition, has the opposition accusing her of insulting the people of West Bengal.

Ever since she came to power, Ms Banerjee has been complaining that West Bengal is broke, thanks to the previous Left government.

"We have managed to raise tax collections by 35 per cent. But we can't make ends meet," Ms Banerjee said. "It is my misfortune. Had I any idea of the state's financial condition, would I have taken up this position? Oh my God! This is a dangerous place. A few of us are struggling against all odds. I believe if we auctioned West Bengal, there would be no buyers."

Her remark has outraged the opposition Left and Congress who feel Ms Banerjee is unable to run the state.

Congress's Manash Bhuiyan made an emotional appeal: "You can criticise your party, you can criticize Congress. But please don't say these things in public because it is denigrating to the prestige and dignity of our state and insulting and humiliating to the people of Bengal."

Promoted
Listen to the latest songs, only on JioSaavn.com
When her Trinamool Congress was a part of Dr Manmohan Singh's coalition, Ms Banerjee had repeatedly demanded a moratorium on the interest owed by Bengal on crores taken as loans from the centre. She now has little bargaining power.