No Word On Madhya Pradesh Cabinet Expansion. Story Behind Delay

Since the party came to power after the Kamal Nath government collapsed with the defection of its senior leader Jyotiraditya Scindia and 23 of his MLAs, the government has been functioning with only five ministers. 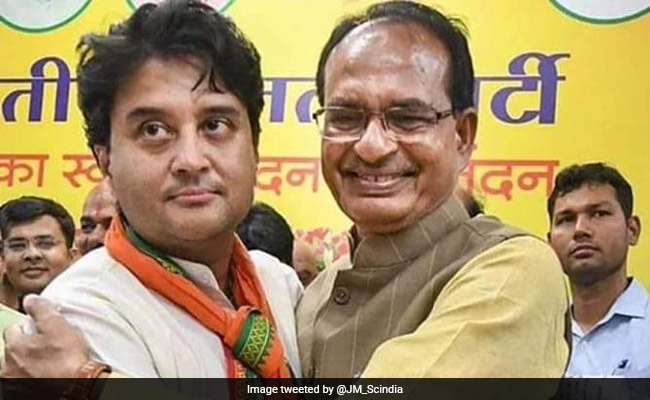 Suspense continues over the long awaited cabinet expansion in Madhya Pradesh, which, Chief Minister Shivraj Singh Chouhan promised, will happen soon. Party insiders say differences over the candidates' list -- coupled with the Central leaders being upset with the Chief Minister over certain issues -- are responsible for the delay.

Last week, Mr Chouhan had promised that the cabinet expansion will happen soon. Since the party came to power after the Kamal Nath government collapsed with the defection of its senior leader Jyotiraditya Scindia and 23 of his MLAs, the government has been functioning with only five ministers.

But despite a series of meetings with the Central leaders, there has been no consensus over the names, party sources said.

Mr Chouhan, who went to Delhi over the week-end, returned to Bhopal this morning and has been tight lipped about the outcome of the meetings.

Sources say the Jyotiraditya Scindia camp --which joined the BJP after his defection in March -- wants 11 berths in the Shivraj Singh Chouhan ministry. Two of the candidates -- Tulsi Silawat and Govind Singh Rajput who were part of Kamal Nath's ministry -- took oath on April 21.

But accommodating nine more former Congressmen bent on getting rewarded, is proving tricky with the Chief Minister being keen on bringing back his old team. Sources said having the same names repeatedly in the ministry has proved a point of friction between the Central leaders and the Chief Minister, who has come to power for a record fourth term in the state.

The Central leadership is also miffed with Mr Chouhan for other reasons -- including the GST raids in Indore. Questions are also being raised on officers closed to Mr Chouhan calling the tax fraud accused gutkha King Kishore Wadhwani, and the fiasco during Rajya Sabha polls, where a BJP MLA cross-voted.

There are also concerns that accommodating 11 Scindia loyalists may upset senior BJP legislators who are eying a cabinet position, and many not go down well with party workers.

The leaders from Gwalior and Chambal -- the backyard of Jyotiraditya Scindia -- are yet to come to a consensus on the names from that region. Mr Chouhan is said to be keen to have his loyalists Bhupendra Singh, Rampal Singh and Rajendra Shukla in the cabinet.

There were issues also with the two Deputy Chief Ministers formula, which is being linked to state home minister Narottam Mishra's visit to Delhi.

Mr Mishra -- considered the man behind "Operation Rang Panchami", the move to topple the Kamal Nath government -- was a contender for the deputy's post. The other one was Mr Scindia's close aide Tulsiram Silawata. Now Mr Chouhan appears to have changed his mind about having two deputies, which is not likely to go down well with the Scindia camp.

Mr Chouhan took oath in March and the first cabinet expansion happened on April 21. Only five ministers took oath at the time and the party cited the coronavirus crisis for keeping down the numbers and the festivities. Later, an expansion was put off citing the Sabha elections.

Sources said the BJP was worried that if the cabinet expansion was conducted before the Rajya Sabha elections, it could have an adverse effect on the outcome of the poll for the party -- indicating that division of berths may not have lived upto the expectations of the former Congressmen.

At the gala welcome arranged for for Jyotiraditya Scindia in Bhopal in March, Mr Chouhan had referred to Mr Scindia as 'Vibhishan' -- Raavan's younger brother in Ramayan, who betrayed him to join Ram's forces.

On Monday, Mr Chouhan had a meeting with Jyotiraditya Scindia in Delhi, where he is recuperating after contracting coronavirus. The MP from Guna has put off his visit to Bhopal and there is no word on his new schedule.

A former MLA of the BJP, Bhanwar Singh Shekawat, meanwhile, has alleged that senior BJP leader Kaikash Vijayavargiya funded nearly a dozen BJP rebels during the 2018 Assembly elections which ensured that Shivraj Chouhan could not regain power for a fourth term.

State BJP chief VD Sharma said that Mr Shekawat has been summoned to Bhopal for discussions and action will be taken if required.