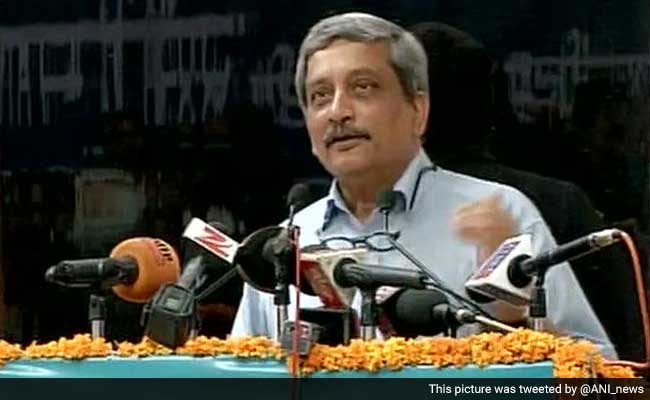 New Delhi: In remarks that have provoked criticism, Defence Minister Manohar Parrikar has said that respect for the Army is waning because India hasn't fought a war in decades.

"In the past, when there was a letter from a military commanding officer to an IAS officer or any other authority, it received attention of the highest order. Today, that respect has diminished... One reason is that for 40-50 years, we have not fought a war. I am not saying we should go to war. I am saying that because we haven't fought a war, the importance of the Army in our minds has dwindled," Mr Parrikar said at an event in Jaipur on Sunday.

Various opposition parties have reacted sharply to the remarks.

"Ministers in this government say anything and embarrass the nation. We are proud of our Indian Army and they have made us proud every time," said Congress leader Pramod Tiwari.

"It is an anti-national statement by the defence minister," said KC Tyagi, a leader of Bihar's ruling Janata Dal (United).

The minister's BJP came out in his support, saying that all he wanted was to urge people to respect the Army more.

"When a defence minister says this, he says it with a lot of experience and great concern. I am sure he made the statement to instill a greater sense of pride for the Army among the people," said BJP spokesperson GVL Narasimha Rao.

The Defence Minister's remarks come at a time thousands of former military personnel are protesting across the nation over the "One Rank, One Pension" rule, which would ensure that defence personnel who retire at the same rank and with the same length of service get equal pension, irrespective of when they retire.

Ex-servicemen were disappointed when the government did not announce the system last month though it was widely expected.
Comments
Manohar ParrikararmyDefence ministerrespect for army