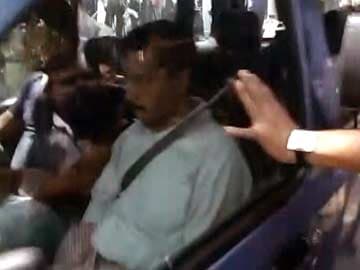 New Delhi: Union Minister Nitin Gadkari  and Aam Aadmi Party or AAP chief Arvind Kejriwal have been unable to arrive at a compromise in the defamation case filed by the former BJP president to seek redressal for the charges of corruption hurled at him.

Judge Gomti Manocha's initiative to get the two sides to settle the case amicably failed after Mr Kejriwal refused to withdraw his allegations.

The Union Minister and the AAP leader faced each other for the first time this morning in the court at the Patiala House.

Mr Gadkari, who is now a Cabinet Minister in the Narendra Modi government, told the judge that he would be willing to withdraw his case if the AAP chief retracted his allegations against him.

Mr Kejriwal, 45, had, in a press conference held in January, named the 57-year-old former BJP president among "the most corrupt politicians of India.''

In retaliation, Mr Gadkari filed a defamation case against the AAP leader.

"I have a conviction-oriented approach. My reputation has been damaged. I have suffered a loss of credibility and image. He doesn't even need to apologise. Even if he says he withdraws the allegation, I won't pursue this case,'' the BJP leader told the court in response to the judge's plea to withdraw his defamation case.

"Any defamation is a bit blot for me. If he has proof, he should show. He has leveled wrong  allegations against me. Either he proves his charges, or withdraws,'' Mr Gadkari added.

Mr Kejriwal, however, refused to retract his charge. "This is not a prestige issue,'' he said.

Promoted
Listen to the latest songs, only on JioSaavn.com
The AAP leader was last month sent to jail after he refused to furnish the bond needed in the defamation case. He had since been insisting that the court should not ask him for one and argued that he has committed no crime.

He finally had to furnish a personal bond on the orders of the Delhi High Court to secure his release.