Barabanki's Chief Medical Officer BKS Chauhan has issued a press note, claiming the baby was brought dead to the hospital. 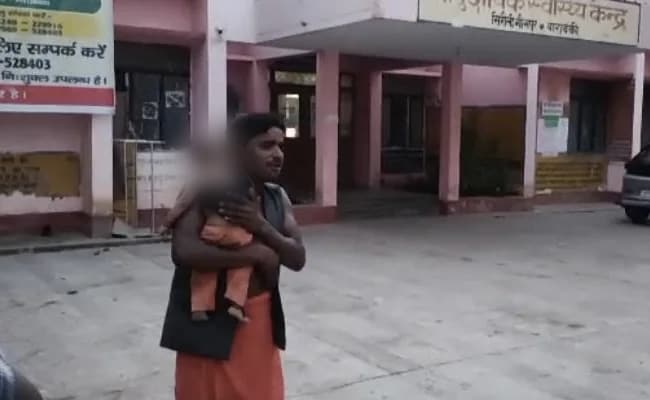 Video, shot by onlookers, showed the man holding the dead child in his arms

Extremely disturbing visuals from Uttar Pradesh's Barabanki district, just 40 km from capital Lucknow, show a father holding his dead five-month-old baby in his arms outside a government hospital in the district, alleging no doctor attended to the infant for two hours ultimately leading to her death.

However, Barabanki's Chief Medical Officer BKS Chauhan has issued a press note, claiming the baby was brought dead to the hospital. Mr Chauhan added that the infant was examined by the doctors on duty who found she was brought dead.

"The superintendent of the hospital had told me that the doctor on emergency duty and paramedical staff both examined the baby. The parents of the baby told us the baby had fallen from the terrace," Mr Chauhan said in a video statement.

The incident took place at the government-run Community Health Centre in Barabanki's Sirauli Gauspur on Sunday evening. The same complex also has a 100-bed Covid hospital for mild cases.

Mobile phone videos, shot by onlookers, showed the man holding the dead child in his arms and wailing outside the hospital gate. His wife can also be seen in the videos sitting at a distance, cutting a sorry picture.

"All these people keep on talking about only COVID-19. No one wants to touch a patient fearing Covid. There is not one doctor here to attend to my child. She just fell down from a cot. And she died," the man can be seen lamenting in one of the videos.

"What is this system?" the man is seen asking.

Another video clip shows the man crying. "It has been two hours. Not a single doctor came. Someone said have patience. My child has died, and I should keep patience?" the man was captured saying in another clip.

A third video clip shows a bunch of policemen speaking to the man at the gates of the hospital.

"What is this drama?" a cop can be heard saying.

"My daughter has died, and you say this is drama," the man, still crying, shot back.

The same policeman then asks the man to "calm down" and also to provide a written complaint for action to be taken.