"No Jobs, How To Survive": Bihar Migrants Who Returned Amid Lockdown Leave 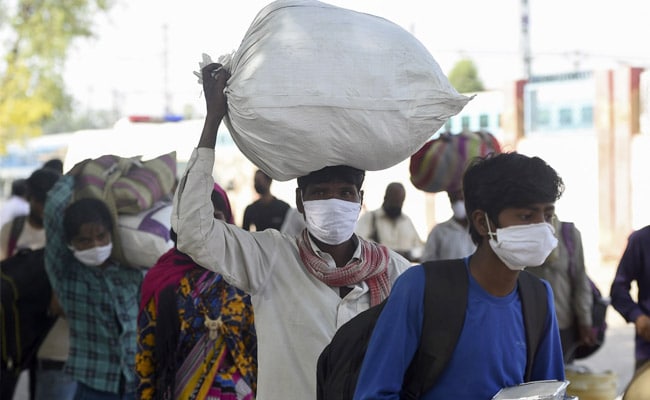 How long can a migrant labourer and his family of five survive without food on the table - this was the question asked by Umesh Das, a resident of north Bihar's Benipur and one of lakhs of daily wagers to return home amid a coronavirus lockdown that left them without jobs, shelter or food.

Mr Das and his family came home from Surat in Gujarat, buoyed by Bihar Chief Minister Nitish Kumar's promise of jobs. Weeks later they, like tens of thousands of others caught in a cruel twist of irony, are being forced to return to the states they fled from to find employment.

"How long can I survive by borrowing money from here and there. There is nothing here. No industry, no sugar mills... nothing. So we're forced to go back," Umesh Das told NDTV on board a special train to Ahmedabad today.

Over 32 lakh people have returned to Bihar since the shutdown was imposed in March. To their sorrow (and fury), they are now realising there is little work in the state despite Nitish Kumar claiming they will not have to migrate again.

NDTV has spoken to some of them, many of whom blame the chief minister for failing to create jobs and forcing them to look elsewhere.

"Had we got employment opportunity here, we would never have migrated to any other place," Suraj Kumar, who used to work at a factory in Surat and is now at a quarantine centre in Sonepur, said.

Naresh, another migrant from Bihar on his way back to Surat, said: "Everyone can't work as a MNREGA worker. We looked for alternatives but realised options are limited - either die from hunger or coronavirus".

Fortunately for these lakhs of frantic and struggling men and women, the phased re-start of factories and industries means the jobs they were forced out of a few weeks or months ago are now available again.

These trains - part of the Railways' own phased re-start of passenger services - are not as crowded as the special ones being run to return migrants.

Many of those on board say they are returning to confirmed jobs in factories they used to work in; in many instances they say their former (and soon to be current, again) employers called asking them to return as they look to get their factories operational once again.

However, disappointment with the Nitish Kumar government, which carried out skill mapping with much fanfare, is evident.

Nadeem Ansari, a resident of Madhubani district who worked in a saree factory, said he returned in the first week of June and tried to find a job. Having failed to do so, and now on his way back as well, Mr Ansari said he would not return for at least another year.

The state government has claimed two lakh new MNREGA job cards have been issued but many, including MD Naushad, another migrant worker, said he was told that even existing card holders were struggling to find jobs.

Those with new cards would struggle even more, he was told.

Many of those returning are aware the coronavirus outbreak, which has claimed over 16,000 lives so far, is far from over. However, they are also aware that staying at their hometowns and villages is not a feasible long-term option.