No Chance Of Win At Centre When Rahul Gandhi Will Lose Amethi: Smriti Irani

Smiti Irani, who was in Shillong to attend the convocation ceremony of the National Institute of Fashion Technology (NIFT), addressed media persons on the sidelines of the event. 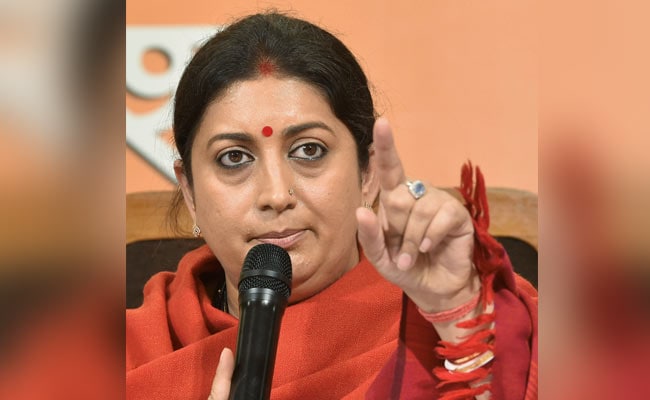 Shillong: Mocking the Congress's claims of coming back to power, Union Minister Smriti Irani today predicted the party's president Rahul Gandhi would not be able to even secure his Lok Sabha constituency in the 2019 general elections.

Ms Irani, who was in Shillong to attend the convocation ceremony of the National Institute of Fashion Technology (NIFT), addressed media persons on the sidelines of the event.

"In Amethi, he (Rahul) lost every Assembly seat, every local election in the past four years. What could be his chances of coming to power at the Centre when he is guaranteed to lose election in his own constituency," the Union Textile Minister said here.

The UPA government left behind a 48-year-old legacy of apathy, she said.

"This is 48-year-old legacy of apathy of one family versus 48 months of good governance under (Prime Minister) Narendra Modi," Ms Irani claimed.

The minister also said that the NDA government, after coming to power, had to handle the scams and cope with the debts incurred by the erstwhile Congress government.

"I would like to remind you that when we came to power and got the opportunity to serve people, the economic condition of the country was poor. The government had to address the financial challenges in every sector, especially pertaining to the scams and debts of the UPA rule," she said.

The NDA government, on the other hand, ensured that the social needs of the people are met with, under all circumstances, she asserted.

The Congress is "frustrated" as the family, which was at the helm of affairs for the past 60 years, has been losing every election over the last four years, Ms Irani said in an apparent dig at the Gandhi family.

"Rahul Gandhi, who did not even open a district collector's office in his constituency, is giving speeches about development," the minister said.

Promoted
Listen to the latest songs, only on JioSaavn.com
The Textile Minister also alleged that the former Congress government, during its tenure, had neglected the weavers, most of whom hail from the northeastern region.

"The government now pays 75 per cent of the education fees for weavers' family. Every state now has textile manufacturing units, which were set up within two years," she said.