"Such People Have No Religion": Nitish Kumar On Giriraj Singh's Iftar Dig

Nitish Kumar announced last week that his Janata Dal United would not join PM Modi's government because only one cabinet spot was unacceptable to him. 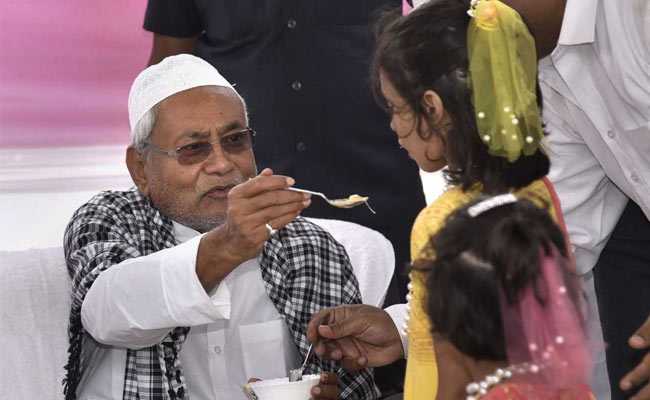 Union Minister Giriraj Singh, pulled up by his party BJP for a controversial tweet, received another biting comment from ally Nitish Kumar, who said "those who make unnecessary statements for attention have no religion".

Giriraj Singh was reprimanded by BJP chief Amit Shah yesterday over a tweet targeting leaders like Nitish Kumar, another ally Ram Vilas Paswan and BJP's Sushil Modi for attending an Iftar and wondering whether they would show the same verve for Navratri.

"I will not react to what he (Giriraj Singh) said. Some people have developed an attitude to say unnecessary things to remain in the limelight so that the media cover them. Such people have no religion as every religion preaches respect and love for each other," Nitish Kumar said on Wednesday.

The Bihar Chief Minister, wearing a skull cap, was speaking to reporters in Patna after offering prayers at a mosque for Eid-Ul-Fitr.

"We all should work together and not use derogatory language against each other. You can follow any religion but every religion preaches respect and love for each other. Those who do the opposite have no religion," Mr Kumar said.

Giriraj Singh, a Union Minister and parliamentarian from Begusarai, had tweeted photos featuring Nitish Kumar, Ram Vilas Paswan and his son Chirag Paswan and Sushil Modi from Iftar parties and written: "How beautiful would this picture have been if a Navratri meal would have been organised with the same eagerness. Why do we hold back on our own faith and believe in pretence?"

Amit Shah dialed the minister and reportedly asked him to avoid such statements. Giriraj Singh is known for his outrageous and divisive statements and his habit of ordering critics to "go to Pakistan".

The BJP's damage control was swift, given that Nitish Kumar has been upset about cabinet berths at the centre.

The Bihar Chief Minister announced last week that his Janata Dal United would not join PM Modi's government because only one cabinet spot was unacceptable to him.

The JDU and the BJP contested 17 seats each in 40-seat Bihar, leaving the rest for smaller allies. The BJP won all, the JDU won 16 seats.