Read inOther Languages
This Article is From Dec 23, 2019

Nitin Gadkari said there are "cases of around Rs 89,000 crore in his ministry" and he has warned the concerned officers about the economic situation 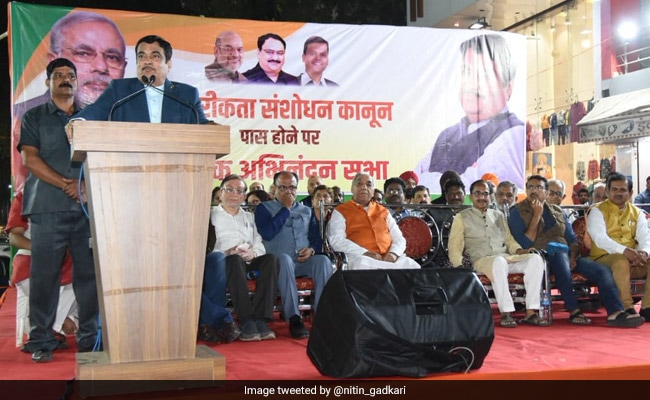 I will only tell you the economy of the country is going through a challenging situation: Nitin Gadkari

Union Minister Nitin Gadkari on Sunday expressed deep concern over the economic slowdown in the country.

He said there are "cases of around Rs 89,000 crore in his ministry" and he has warned the concerned officers about the economic situation as they had to handle all the projects.

"I called senior officials at my home and told them there are cases of around Rs 89,000 crore. I will not tell you what to do. I will only tell you the economy of the country is going through a challenging situation. There is a shortage of liquidity and you have to take decisions quickly," Mr Gadkari said at an event.

Mr Gadkari's statement comes at a time when the opposition has targeted the Centre on several issues including inflation, economic slowdown, unemployment, National Register of Citizens (NRC) and the Citizenship Amendment Act.

The current size of the Indian economy is estimated at USD 2.7 trillion. However, the Central government has announced to make efforts to ensure India becomes a USD 5 trillion economy by 2025.

On Friday, Prime Minister Narendra Modi had said that discussions on achieving the vision of making India a USD 5 trillion economy did not come all of a sudden and asserted that the country has strengthened itself in the last five years to achieve these goals.

"Talks on USD 5 trillion dollar economy haven''t come all of a sudden. Our country has strengthened itself so much in the last five years that we can aim to achieve such goals," PM Modi said while addressing the inaugural session of ''100 years of ASSOCHAM'' in New Delhi.

"Every group that can enable the economy is keeping the target of USD 5 trillion economy at the centre of its plans and talks are happening in several sectors. These discussions are positive. Credit for every achieved target goes to the people and not to the government," he added.