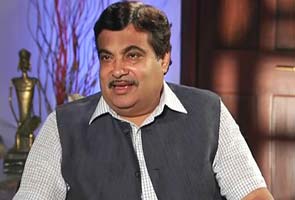 New Delhi: The BJP has said that its president, Nitin Gadkari, is willing to accept and cooperate with "any sort of inquiry" into allegations of dubious funding for his business, Purti Power and Sugar. However, the Opposition party says there has to be a level playing field for investigations centred on politicians who are accused of graft. The Congress, it said, is protecting its own.

Over the weekend, NDTV broke the story of how a company that won infrastructure projects during Mr Gadkari's term as minister of  Maharashtra's Public Works Department went on years later to invest in Purti Power and Sugar, co-founded by Mr Gadkari in 2000.  Mr Gadkari, appearing in NDTV's studios, denied that the investment by Ideal Road Builders Group was a quid pro quo for the massive contracts it won when he was in office, or that there was a blatant conflict of interest in accepting investment from the contractor.  He described DP Mhaiskar, who owns Ideal Road Builders, as a good friend. NDTV also disclosed details of how many of the investor companies in Mr Gadkari's firm are steeped in mystery - their official addresses, for example, don't check out; many of them are headquartered at the same small room in Mumbai, pointing to the strong possibility of shell investors.

"Unlike the Congress, our president has said he is open to any inquiry," said BJP spokesperson Nirmala Sitharaman today. She compared this response to the case of Sonia Gandhi's son-in-law, Robert Vadra, who has been accused of accepting sweetheart deals from real estate giant DLF.  In exchange, the Congress government in Haryana allegedly did favours that promoted DLF's vast business interests in the state.  Mr Vadra, DLF and the Haryana government have refuted the charges. A series of senior cabinet ministers enthusiastically defended Mr Vadra -a point of much criticism among the opposition, the media and the activists headed by Arvind Kejriwal, who has launched a new political party and  "outed" Mr Vadra's DLF connection by releasing documents about their transactions at two different press conferences.

Corporate Affairs Minister  Veerappa Moily told NDTV yesterday that an inquiry will be conducted on the basis of NDTV's expose. He, however, refused to comment on whether the business dealings of Mr Vadra would be put to similar scrutiny.

The BJP is also seeking an inquiry into another NDTV expose that showed a steel major, Ispat Industries Limited (IIL), recorded cash payments to officials in the Steel Ministry. The documents were seized during income tax raids on IIL in December 2009. They showed 2.8 crores paid over a year to "VBS." Vibrabhadra Singh was Steel Minister at the time; he has denied accepting any pay-offs, but the BJP says he must be probed.

Mr Gadkari has recently been granted a second consecutive term as the BJP president- a decision that required amending the party's constitution. In NDTV's studio on Saturday, he refuted suggestions that several of the companies who have invested in Purti appear to be fronts.

The Ministry of Company Affairs website for 2010 shows that there are 18 investor firms for Purti. Many of these companies are registered at the same address; in some cases, they share Directors. NDTV found that the directors and the companies were not traceable at their listed addresses. Mr Gadkari said official records may need to be updated to reflect new addresses. "There are 10,000 stakeholders," he said, of Purti. Mr Gadkari said he could not be expected to have ready details, but, on prompting, said he could furnish "addresses of all 10,000."

Mr Gadkari is no longer chairman of Purti; he stepped down in August last year.

Mr Gadkari was the Public Works Department Minister of a Shiv Sena-BJP government in Maharashtra in 1995-99, when Ideal Road Builders won so many contracts that its turnover rose from 41 to 67 crores in a period of three years  (96 to 99).  Mr Gadkari told NDTV that he did not sanction the deals; many were approved by the union government.

In 2010, the Purti Group received a loan of 165 crores from Global Safety Vision, a company started by Mr P Mhaiskar.  With this one loan , Purti was able to repay all its outstanding debt. Surprisingly, in its last regulatory filings, Global Safety Vision had only 1 lakh paid up capital.

"Purti has losses of 64 crores, Mhaiskar loaned me 165 crores from his company, and I have repaid him 64 crores with interest,"  Mr Gadkari said, adding that his company's assets were mortgaged to Mr Mhaiskar.

Promoted
Listen to the latest songs, only on JioSaavn.com
Mr Gadkari also does not agree that there is a conflict of interest in his being a leading politician and a businessman. His latter role, he says, has ceased to be pertinent. His sugar company is one of the biggest companies in the Vidarbha region; Mr Gadkari says that business is an agriculture cooperative, set up for social good to help farmers in the region driven to suicide.