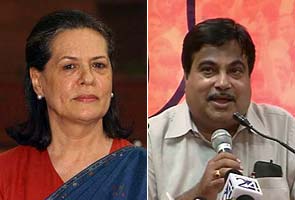 New Delhi: Soon after the Congress asked Sonia Gandhi to decide on the party's nominee for the Presidential elections today, BJP chief Nitin Gadkari visited the Congress president. The two leaders met for about six to seven minutes amid much speculation that they discussed candidates for President.

Mr Gadkari, however, said he went to meet Mrs Gandhi only to invite her for the wedding of his youngest son later this month and that nothing political was discussed.

But the BJP chief was given the appointment to meet Mrs Gandhi after the highest decision-making body of her party, the Congress Working Committee (CWC), passed a resolution authorising her to pick the party's candidate for President, fuelling speculation. Sources said Sonia Gandhi's strategy for the important election to be held next month, is to try and build consensus around candidates for both President and Vice-President.

Sources said at their meeting at her 10 Janpath residence, Mr Gadkari requested Mrs Gandhi to attend the reception party for his son to be held in Delhi on July 2.

Political commentators see significance in today's meeting. They point out that it is rare for a BJP leader to make such an effort as Mr Gadkari did and that if Mrs Gandhi does attend the function, it could help make for a better political climate in the country.

Promoted
Listen to the latest songs, only on JioSaavn.com
Mr Gadkari touched the feet of yoga icon Baba Ramdev and promised him the BJP's support in his campaign against black money. Mr Gadkari also suggested that the Congress set aside political differences and meet Baba Ramdev too. "Is asking for measures to get back black money against national interest? Congress should not get the politics into it," he said.