The protest, #NirbhayaDishaMe, saw people from all walks of life expressing outrage over the law and order situation. 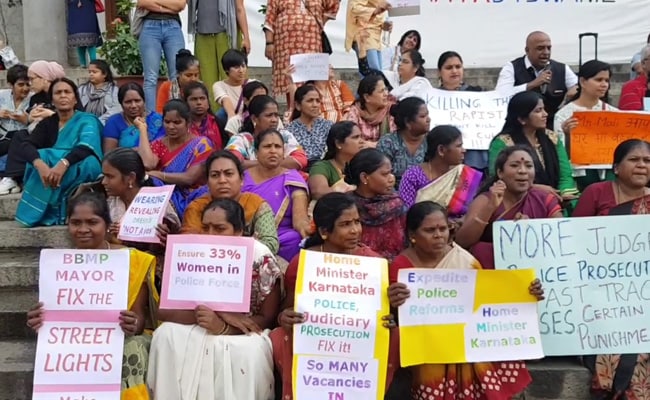 The protest site also had a "wishing wall" where people can list down their demands.

In the wake of the rape and murder of a Hyderabad veterinarian, Bengaluru's Town Hall on Sunday became the protest venue for citizens concerned over the crimes against women. The protest, #NirbhayaDishaMe, saw people from all walks of life expressing outrage over the law and order situation.

Women's rights activist, Brinda Adige said, "Basically we want to hold the government accountable and responsible for what is happening in our cities, our towns, our villages, our country. We are a country that has gone to the moon and is looking for water in Mars. How is it that I am not able to guarantee safety to my child, to a woman, to a citizen on a street here on Earth? We don't want victims and witnesses to run around in circles. We need to say your mindsets cannot be patriarchal, chauvinistic, no sexist language. It is not for you to give me an advisory and tell me what to do and what not to do. Implement the laws to see that we are safe."

The protest site also had a "wishing wall" where people can list down their demands.

Tara Krishnaswamy, Co-Founder of the group Citizens for Bengaluru said, "Women and men have gathered here to protest against the series of rapes and state inaction. Behind us you see a white banner which is what we call a wishing wall. Even when gruesome incidents happen - like in Hyderabad and in other places that don't get the coverage - we see the police patronising us, various agencies like the home ministry issuing advisories. Justice is not served. Instead, they tell women where to go, how to be, how to behave. So on this wishing wall, we are writing our demands. To say what we need from the city, whether it is streetlights, more police, more female police, fast-track judges for fast track courts. We will take this and submit it to the chief minister and home minister."

"This is not just about the Nirbhaya, Disha cases. It is about the rape culture that is pervasive in our society. This is a societal issue. We should all take cognisance. We should all be aware. We need to stop the problem from cat-calling, sexual harassment in the film industry. We need swift justice. This is something that is going on every 20 minutes," he told NDTV.

Priya Prasad, another participant, suggested that members of the transgender community can be employed by police to ensure the protection of women. "How can India progress and shine when one half of the population lives in fear like this? Of course, we need more women in the police. And we can also rope in the transgender community for the protection of women. They have a livelihood and we feel more safe."

The two-hour protest will be followed by similar events in other Indian cities. Today's protest comes ahead of the seventh anniversary of the Nirbhaya gangrape. Four convicts are currently on death row after the Supreme Court rejected their appeals for a lesser punishment.