Nirav Modi was denied bail by District Judge Marie Mallon at his first hearing, soon after his arrest by Scotland Yard officers.

Fugitive jeweler Nirav Modi has been denied bail again by a court in UK. The fugitive jeweler appeared before the Westminster Magistrates Court judge in UK today. The judge reviewed additional evidence submitted by the prosecution against him, just ahead of his second bail application hearing. Opposing his bail, prosecutors told the court that he threatened an eyewitness and tried to bribe another to evade arrest. The Crown Prosecution Service or CPS, which is appearing on behalf of Indian authorities, argued in court that there is a great risk of Nirav Modi fleeing if he is granted bail. "There is a real risk that he could flee, interfere with witnesses, interfere with evidence," the prosecution said.

Nirav Modi was denied bail by District Judge Marie Mallon at his first hearing, soon after his arrest by Scotland Yard officers from a central London bank branch as he tried to open a new bank account. He has been in custody at the HMP Wandsworth prison in south-west London since last Wednesday.

Here are the LIVE updates on Nirav Modi's court hearing:

Mar 29, 2019 21:04 (IST)
Next date of hearing fixed as April 26
Nirav Modi will now return to HMP Wandsworth prison in south-west London, where he has been lodged since last Wednesday. The next date of hearing has been fixed as April 26, when Nirav Modi will be produced in court via video conference.
Mar 29, 2019 20:40 (IST)
Nirav Modi was trying to move away from India at an important time
Nirav Modi's attempt to try and seek citizenship of Vanuatu shows he was trying o move away from India at an important time, says UK judge. (news agency PTI)
Mar 29, 2019 20:21 (IST)

Nirav Modi's attorney Claire Montgomery: Nirav Modi has been in the UK since January 2018. He has known since August. 2018 that he is going to be extradited. He has no place as a safe haven. He has lived openly in the UK & has made no effort to hide. https://t.co/YjR4uC6Iz6 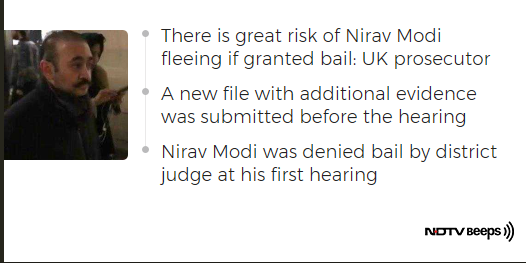 Mar 29, 2019 19:12 (IST)
What Nirav Modi's lawyer told court
The reality is that even given the magnitude of numbers, someone arrested with this allegation, they would be granted bail. The type of person caught up on that sort of allegation, does not have a long history on criminical conduct. Preserves his good conduct and character. The reality is that the size and nature of these allegations is not a safe way to judge whether he could flee.
Mar 29, 2019 19:07 (IST)
Case being heard by judge who ordered Vijay Mallya's extradition
The case is being heard by Chief Magistrate Emma Arbuthnot, who is the same judge who had ordered the extradition of former Kingfisher Airlines boss Vijay Mallya last December.