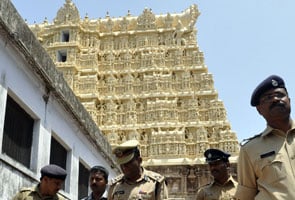 Thiruvananthapuram: A vast treasure trove of billions of dollars in gold coins, jewels and precious stones unearthed at a Hindu temple in India was expected to grow further in value Monday as officials opened the last two secret vaults sealed for nearly 150 years.

The discovery has instantly turned the 16th-century Sree Padmanabhaswamy Temple into one of the wealthiest religious institutions in the country, prompting a government move to beef up security around it.

The four vaults already opened in recent days at the temple in Thiruvananthapuram, the capital of the southern state of Kerala, held a vast bounty that unofficial estimates peg at Rs 90,000 crore ($22 billion).

Other treasures unearthed so far include statues of gods and goddesses made of solid gold and studded with diamonds, rubies, emeralds and other precious stones, crowns and necklaces, all given as gifts to the temple over the centuries.

The volume of gold and silver coins was so enormous that the investigators weighed the coins by the sackful, rather than counting them, officials said.

The temple, built by the maharajas who ruled the then-kingdom of Travancore, remained under the control of the erstwhile royal family after India's independence in 1947.

India's Supreme Court ordered the inspection of the vaults after a lawyer petitioned a local court asking the state government to take over the temple, citing inadequate security.

The operation began last week and the final vaults were to be unlocked Monday.

Before the trove was uncovered, there was almost no visible security at the temple, save for a few local security guards patrolling the complex with batons, mainly for crowd control.

Promoted
Listen to the latest songs, only on JioSaavn.com
Kerala's police chief, Jacob Punnoose, said he sent extra police officers to guard the temple and is planning a high-tech security system to protect the treasure.

"We plan to enhance security in a manner which will not interfere with the activities of the temple or devotees," Punnoose said.
The security plans include the installation of digital electronic networks, closed circuit cameras and metal detectors at the entrance and exits of the temple.