Sushma Swaraj said that India believes in an atmosphere that is free from violence and hostility, and believes that unresolved border issues could be resolved when approached in the right spirit. 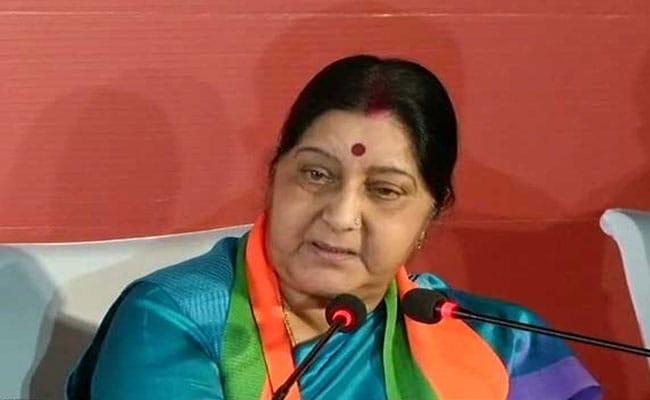 No country is immune to the "existential threat" of terrorism, said Sushma Swaraj.

External Affairs Minister Sushma Swaraj on Wednesday said no country is immune to the "existential threat" of terrorism and the need of the hour is to ensure zero tolerance towards it.

During her address to the Raisina Dialogue conference, Ms Swaraj said, "There was a time when India would talk about terrorism and it would be treated as a law and order issue at many global platforms. Today, no country, big or small, is immune to the existential threat, particularly terrorism actively supported and sponsored by states."

"In this digital era, the challenges are even greater with vulnerability to radicalisation," she added.

Ms Swaraj said that India believes in an atmosphere that is free from violence and hostility, and believes that unresolved border issues could be resolved when approached in the right spirit. She also said that India's commitment to upholding territorial integrity and sovereignty remains unwavering.

"Our commitment to upholding territorial integrity and sovereignty remains unwavering. So, our consistent message is unresolved border issues can be resolved when approached in the right spirit. We believe in an atmosphere free from violence and hostility," Ms Swaraj said.

Underlining that India is a proactive and constructive contributor to upholding international peace and security, the External Affairs Minister noted that regional initiatives should be based on transparency.

Terming climate change in developed and underdeveloped nations as  "worst victim", Ms Swaraj said that these countries neither have the capacity nor the resources to meet the crisis.

"In today's inter-connected and interdependent world, foreign policy has a direct and visible impact. We have rebuilt India's bridges with the neighbourhood. For us, transformation is not just a national agenda, but a global vision," she further said.

Ms Swaraj said that India stands for a democratic and rules-based international order in which all nations should be treated as equal.

Talking about India's contribution to neighbourhood countries, Ms Swaraj said, "We rebuilt India's bridges literally and figurately with its immediate and extended neighbourhood. We have also devoted a much higher amount of resources and attention to the neighbourhood for pushing next-generation regional connectivity and critical infrastructure at times of distress and need."

On India's partnership with France in launching the International Solar Alliance (ISA), Ms Swaraj said, "this evidences the tremendous strides being made through collaboration. India and other countries alike must remember that the world is one family."

"Our focus is on finding solutions to challenges before us through innovative approaches and dynamic partnerships. India's own engagement with the world is rooted in its civilisational ethos which has at its heart co-existence and democratic values," she added.

Ms Swaraj noted that India is leading the way in reinvigorating global institutions and organisations, whether it is founding the International Solar Alliance, playing an active role in humanitarian and disaster relief operations in its immediate neighbourhood or the country's membership of key institutions of global governance.

Underscoring the need of making India a human resource power by connecting the youth to global opportunities, the External Affairs Minister said, "This is being done with confidence that our prosperity, better connected and skilled young India will be the engine for growth and prosperity not only in South Asia but far beyond."