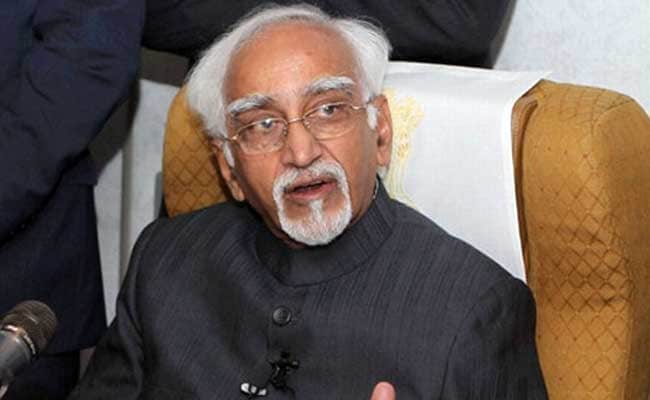 Vice President Hamid Ansari on Saturday said the need for direct air connectivity with West Africa nations like Nigeria was very obvious though airlines have to take a final call in this regard.

"In this deregulated world of civil aviation, airlines have to make judgements about traffic and viability but the need for air connectivity is very obvious," he told reporters on his return from his two-nation visit of Nigeria and Mali.

Flights between Nigeria and India are via cities like Doha, Abu Dhabi, Addis Ababa, Istanbul and even Amsterdam. Mr Ansari described his five-day visit to the two countries as very satisfying.

"Last year we hosted the India-Africa Summit in Delhi. This visit was a follow-up of the many ideas that were discussed during the meet," he said.

Terming Nigeria as a major country, he said it has a place of its own in Africa.

"We are Nigeria's biggest partner in trade in Africa. It is also a major supplier of energy."

New areas of cooperation were identified - renewable energy, solar alliance, agriculture, manufacturing, health and science and technology with particular interest shown in our space programme.
They were very keen on assistance on peaceful usage of nuclear energy, Mr Ansari said.

"Discussions with the Nigerian leaders were very productive and positive," he said.

In capital Abuja, he held talks with President Muhammadu Buhari and his counterpart Yemi Osinbajo.

Regarding Mali, he said the country lacks development in many areas and India will concentrate on two aspects -- capacity building and human resources development which it is much in need of.

"It is a country rich in water resources and fertile land but not been able to make good use of them," he said.

"Mali said it has immense cattle wealth but has been unable to utilise it due to lack of processing units," he said.

Promoted
Listen to the latest songs, only on JioSaavn.com
Mr Ansari also said that the two countries have decided on a joint commission meeting.

He said India flagged its concerns with the two countries on three things - terrorism, reform of international institutions with focus on UN and OIC's anti-India stand.