The Indian Medical Association called for a protest today against recent incidents of violence against healthcare professionals in different parts of the country. 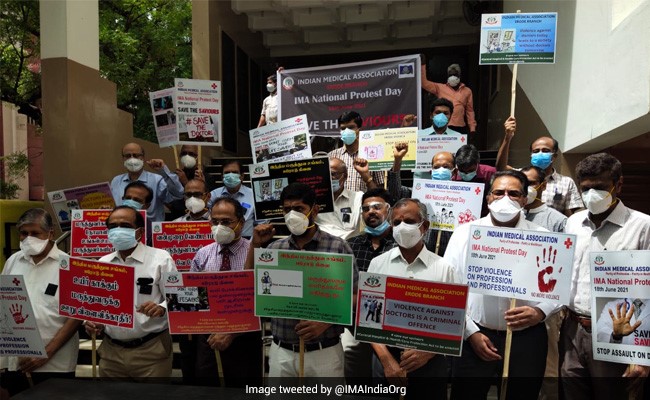 Banners, placards were put up at about 5,000 hospitals and clinics in Tamil Nadu

The IMA had called for the protest against recent incidents of violence against healthcare professionals in different parts of the country.

The protest with "Save the Saviors" slogan was peaceful and did not affect the services in hospitals, Dr AK Ravikumar, Honorary State Secretary of IMA said.

No medical services were withdrawn or patient care interrupted during the protest, which strictly followed the all Covid protocols.

"Our members wore black badges as a sign of protest. Our medicare service to the patients remained unaffected," he told news agency PTI.

Awareness banners and placards have been put up at about 5,000 hospitals and clinics, which are members of the IMA.

Compared to other states, Tamil Nadu is better placed since it had passed the "Tamil Nadu Medicare Service Persons and Medicare Service Institutions Prevention of violence and damage or loss to Property Act 48, 2008" during the tenure of former Chief Minister M Karunanidhi, Dr Ravikumar said.

"From the time the Act has come into existence, violence against healthcare professionals has drastically declined in Tamil Nadu. But unfortunately, the police in some of the districts are unaware of this Act. We have requested the state Director General of Police to sensitise the subordinate officials about the Act," he said.

Urging Chief Minister MK Stalin to support their cause for a central legislation similar to Act 48 of 2008, IMA state president Dr P Ramakrishnan and Dr Ravikumar pointed out that Tamil Nadu was the second state to pass such an Act to protect medical professionals and hospitals from violence.

Acts of violence were happening at regular intervals in various states across India and even women are not being spared, they said.